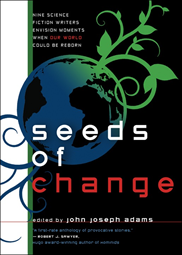 Here’s the cover copy and the full table of contents of my forthcoming original SF anthology for Prime Books, Seeds of Change.

These nine stories sow seeds of change across familiar and foreign territory, from our own backyards to the Niger Delta to worlds not yet discovered. Pepper, the mysterious mercenary from Tobias S. Buckell’s Crystal Rain and Ragamuffin, works as an agent for change—if the price is right—in “Resistance.” Ken MacLeod envisions the end-game in the Middle East in “A Dance Called Armageddon.” New writer Blake Charlton imagines a revolutionary advance in cancer research in “Endosymbiont.” Award-winning author Jay Lake tackles technological change and the forces that will stop at nothing to prevent it in “The Future by Degrees.” Other stories by K.D. Wentworth, Jeremiah Tolbert, Mark Budz, Ted Kosmatka, and Nnedi Okorafor-Mbachu range from the darkly satirical to the exotic. All explore the notion that change will come.

Will you be ready?

The cover features a very nice blurb provided by Robert J. Sawyer, which says “A first-rate anthology of provocative stories.” Which was redacted down from:

“Isaac Asimov said science fiction is the branch of literature that deals with the responses of human beings to changes in science and technology. His definition put humans in a reactive role, and essentially had science and technology changing on their own. But we can also be proactive, actively making the future what we want — or what we dread. A first-rate anthology of provocative and disturbing stories gathered by the always reliable John Joseph Adams.” — Robert J. Sawyer, Hugo Award-winning author of HOMINIDS