Prior to this year, it’s been my great honor to have been nominated for six Hugo Awards for editing: Three for LIGHTSPEED in the Semiprozine category and three for myself personally in the Best Editor (Short Form) category. Up until now, both LIGHTSPEED and myself had each been 0-3 in our respective categories.

This year both LIGHTSPEED and I were again nominated in the two aforementioned categories. The big difference this year is that the STREAK HAS BEEN BROKEN: LIGHTSPEED won the Hugo Award for Best Semiprozine! I immediately started a new losing streak by losing the Best Editor (Short Form) award to Ellen Datlow, but naturally I’m thrilled that LIGHTSPEED took home the prize. And honestly if I had had to choose which of the two categories I would win, I would definitely have chosen LIGHTSPEED winning Best Semiprozine, so I’m not even a little bit sad.

I wasn’t able to be in London for Worldcon this year to accept the award in person, so one of my partners on LIGHTSPEED, Stefan Rudnicki, accepted on my behalf. Stefan runs the LIGHTSPEED podcast, and has been doing so from day one, so it was really great to have him there to accept for us. And he gets a rocket too (as does our reprint editor, Rich Horton), so I’m really pleased he was there in person to pick it up.

If you missed the awards ceremony, here’s the speech I asked Stefan to read for me:

I am deeply grateful to the readers and award voters who have supported my anthologies and magazines over the years.  I wish I could have accepted this in person, but rest assured, the fact that you all thought I deserved this award means the world to me—thank you so much. Thanks also, of course, to all the writers and publishers I’ve worked with, as well as my editorial colleagues—Gordon Van Gelder, Joe Monti, and Ellen Datlow in particular—and my agent Seth Fishman.

I’m also indebted to all of the folks who help me put together Lightspeed and Nightmare, including the Grammy Award-winning audiobook master reading this right now. (Guys! It’s like an audiobook of my acceptance speech!) The magazines might seem like they’re a one-man show, but they very much are not—they’re huge collaborative projects, and neither of them would exist if not for the diligent efforts of many, many individuals behind the scenes, including Wendy N. Wagner, John Langan, Rich Horton, Robyn Lupo, Erika Holt, E.C. Myers, Jim Freund, Jack Kincaid, Jeremiah Tolbert, and many others.

And last but not least, I have to thank the BEST OF ALL POSSIBLE WIVES—my wife Christie Yant. Her I have to thank for all her love and support, and for inspiring me to attempt great things. I know she’s even prouder of this win than I am.

My rocket should be on its way to me via international post as we speak, but here’s a picture of it: 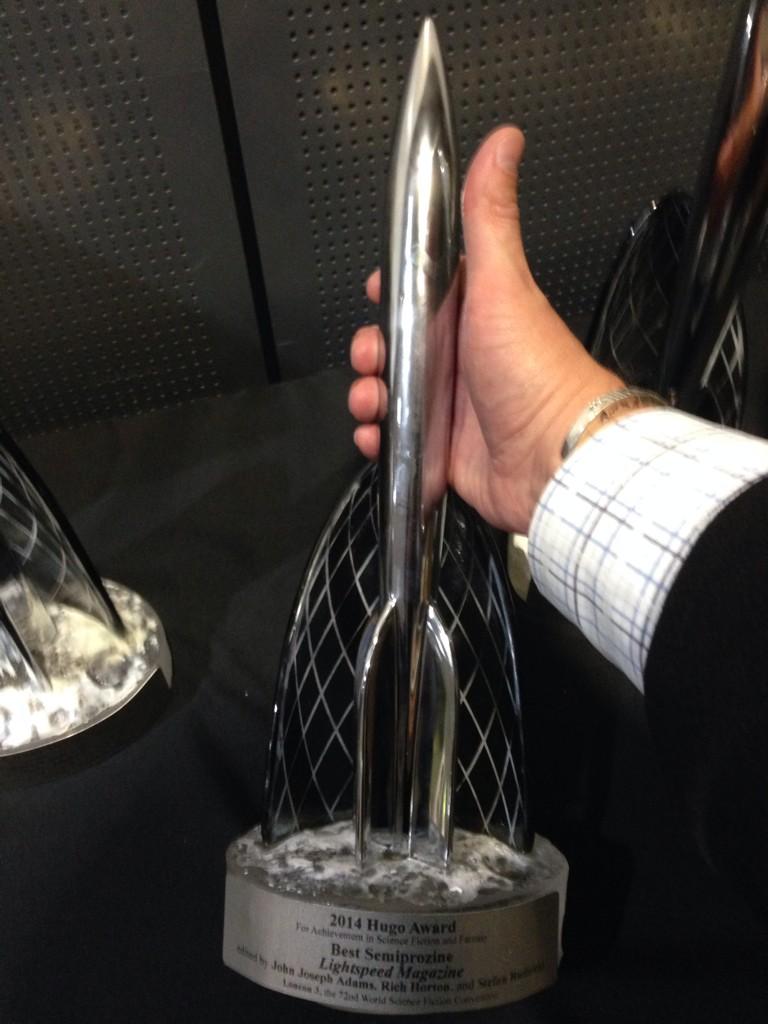 Isn’t it GLORIOUS? Pictured here being held by my former agent (and current editor at Saga Press), Joe Monti. And here it is (or rather here’s Stefan’s rocket) on the Skyboat Media table in the dealer’s room, surrounded by Women Destroy postcards: 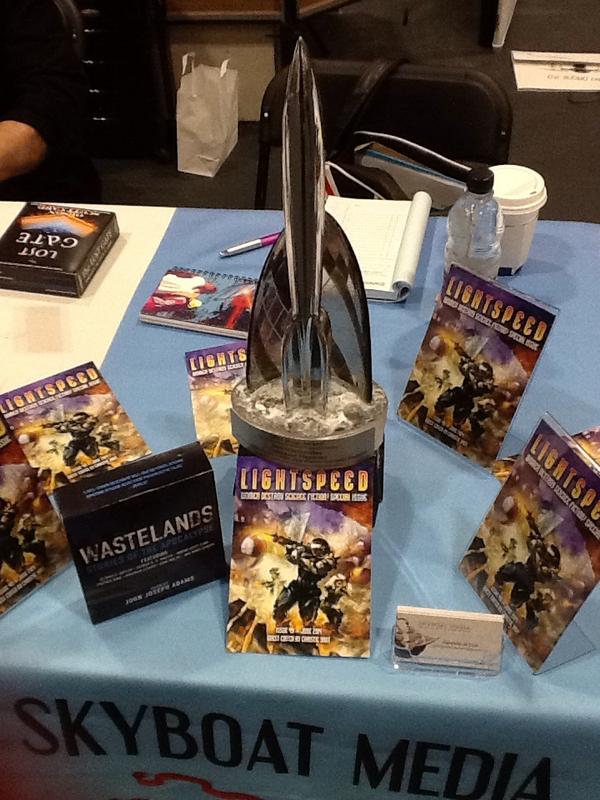 Since I wouldn’t be able to hold my actual Hugo, my wife secretly made me a little gift to tide me over until the actual rocket showed up on our doorstep. She made me the the following out of some junk she found in our backyard and then sculpted the rocket itself out of some kind of putty stuff she got at a craft store. 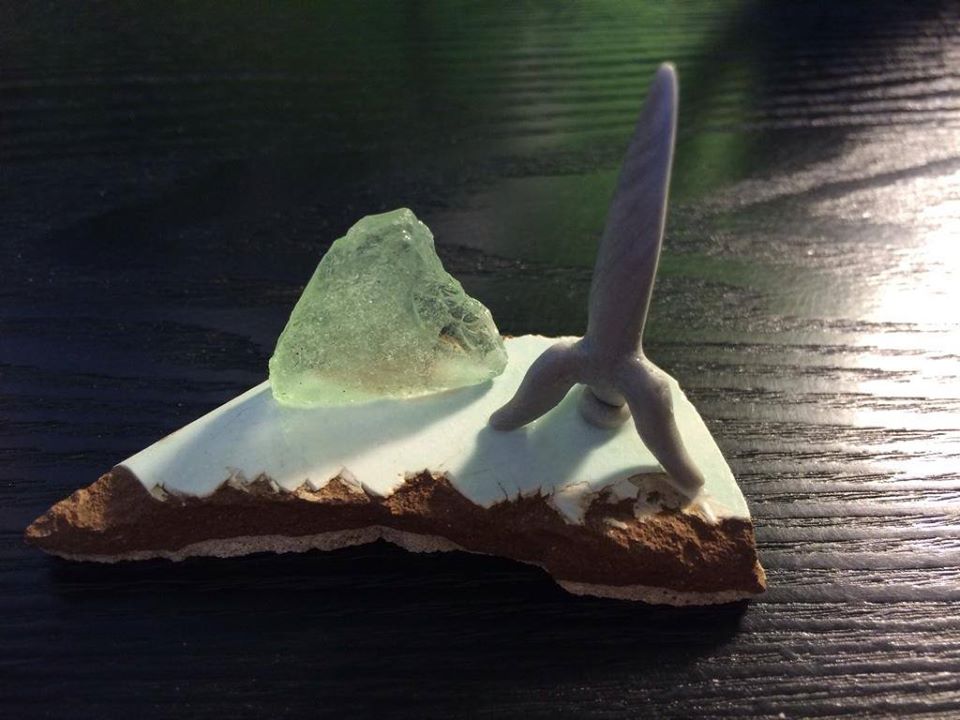 Isn’t IT glorious?? Obviously that’s going on my desk not only to tide me over, but also will stay there forever and ever.

ALSO, to sort of reinforce what I said—that my wife is even more proud of this win than I am—she also revealed to me that shortly after she started working for LIGHTSPEED, she made a wishbox about me and LIGHTSPEED and the Hugos. (Those of you who have read the story of my proposal to her may recall her wishboxes.) Basically the wishbox is a little decorative box that you put a wish in on a little slip of paper. Here’s the LIGHTSPEED one:

And she brought it to every Hugo ceremony so she could show it to me after it came true, but of course she couldn’t hand it to me until it came true, so she’s been carrying it around and keeping it safe for more than three years now.

Thanks again so much to everyone who voted for LIGHTSPEED, and to all of the authors and editors who have helped make it possible. 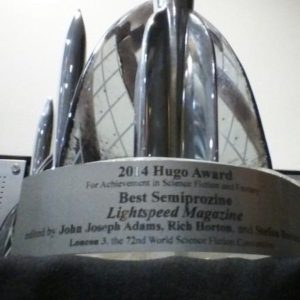