Today, it was announced that a took a big step forward (and sideways) in my career: Now I am not only an editor and anthologist, but a publisher as well. I just acquired the two magazines I edit–Lightspeed and Fantasy–from their current publisher, Prime Books. I’ll officially take over as publisher as of the January 2012 issue. Here’s the press release:

ROCKVILLE, MD, NOV. 7—Prime Books is pleased to announce the sale and transfer of ownership of their acclaimed online magazines Lightspeed (www.lightspeedmagazine.com) and Fantasy (www.fantasy-magazine.com) to John Joseph Adams. Adams, the current editor of both magazines, will officially assume the role of publisher starting with the January 2012 issues.

“With the continuing expansion and success of Prime Books, my attention and time is increasingly consumed by book publishing,” publisher Sean Wallace said. “With John already doing a terrific job as editor, it simply made sense for him to take over as publisher as well.  We’re really thrilled that this has worked out for both John and Prime.”

New publisher John Joseph Adams says he is delighted at the prospect of taking over the magazines and looks forward to the challenges ahead. “It’s an exciting time to be involved in publishing,” he said. “Models are changing and so is the readership, and online magazines have a better shot at sustainability than ever have before. I believe the possibilities for growth are tremendous, and I look forward to staying in the vanguard of this new frontier.”

Fantasy Magazine was established in 2005, and has been edited by Sean Wallace, Paul Tremblay, and Cat Rambo, with Adams taking over as sole editor earlier this year. Lightspeed—published by Wallace and edited by Adams—debuted in June 2010 and was a 2011 Hugo Award nominee. Numerous stories originally published in Lightspeed and Fantasy have been reprinted in best-of-the-year anthologies, and Lightspeed and Fantasy stories have been nominated for the Hugo Award, the Nebula Award, the World Fantasy Award, the Theodore Sturgeon Award, and others. Lightspeed’s first year of fiction has just been published by Prime Books in the print anthology Lightspeed: Year One (ISBN: 978-1-60701-304-4).

In addition to his duties with Lightspeed and Fantasy, John Joseph Adams (www.johnjosephadams.com) is the bestselling editor of many anthologies including Wastelands, The Living Dead, Brave New Worlds, and The Way of the Wizard. In 2011, he was nominated for two Hugo Awards and two World Fantasy Awards.

So this year’s Hugo finalists have been announced…and I’m up for the Best Editor, Short Form award! Additionally, Lightspeed is up for Best Semiprozine, and a story we published in Lightspeed, “Amaryllis” by Carrie Vaughn, is a finalist for Best Short Story!

To say I’m thrilled would be a huge understatement. It’s been so hard to keep this quiet until the results were announced, so it’s great to finally be able to share the news with you all. It is a huge, huge honor to be nominated, and one I will always cherish.

A big congrats to Carrie Vaughn–it’s her first sf award nomination!–and to all of the other authors who have appeared in Lightspeed. And also a sincere congratulations (and HUGE THANKS) to everyone who works with me on the Lightspeed team. I’d like to especially single out my assistant editors Christie Yant and Erin Stocks, my former assistant Jordan Hamessley, my editorial assistant Stacey Friedberg, our podcast/audio editor Stefan Rudnicki, our former nonfiction editor Andrea Kail, and our amazing webmaster Jeremiah Tolbert–you guys helped shape Lightspeed pretty much from the very beginning, and we couldn’t have done it without you. Thanks too to all of the current team members who have helped keep the ship afloat–managing editor Molly Tanzer, current nonfiction editor Esther Inglis-Arkell, editorial assistant Robyn Lupo, and everyone who works on the slush team. And, last but not least, we all owe a huge debt to Lightspeed‘s publisher, Sean Wallace, for taking the bold step to launch the magazine and for giving us all the tools to put out a great product that we’re all really proud of.

And more generally, I owe a huge debt of gratitude to Gordon Van Gelder for being such a fantastic editorial mentor; I wouldn’t have the career I have today if not for his tutelage. And thanks too to Ellen Datlow and all of my other editorial colleagues who have helped me along the way (both directly–and indirectly, by showing me the way with their great anthologies).

For a full list of the finalists, check out Locus Online’s reportage of the nominees. 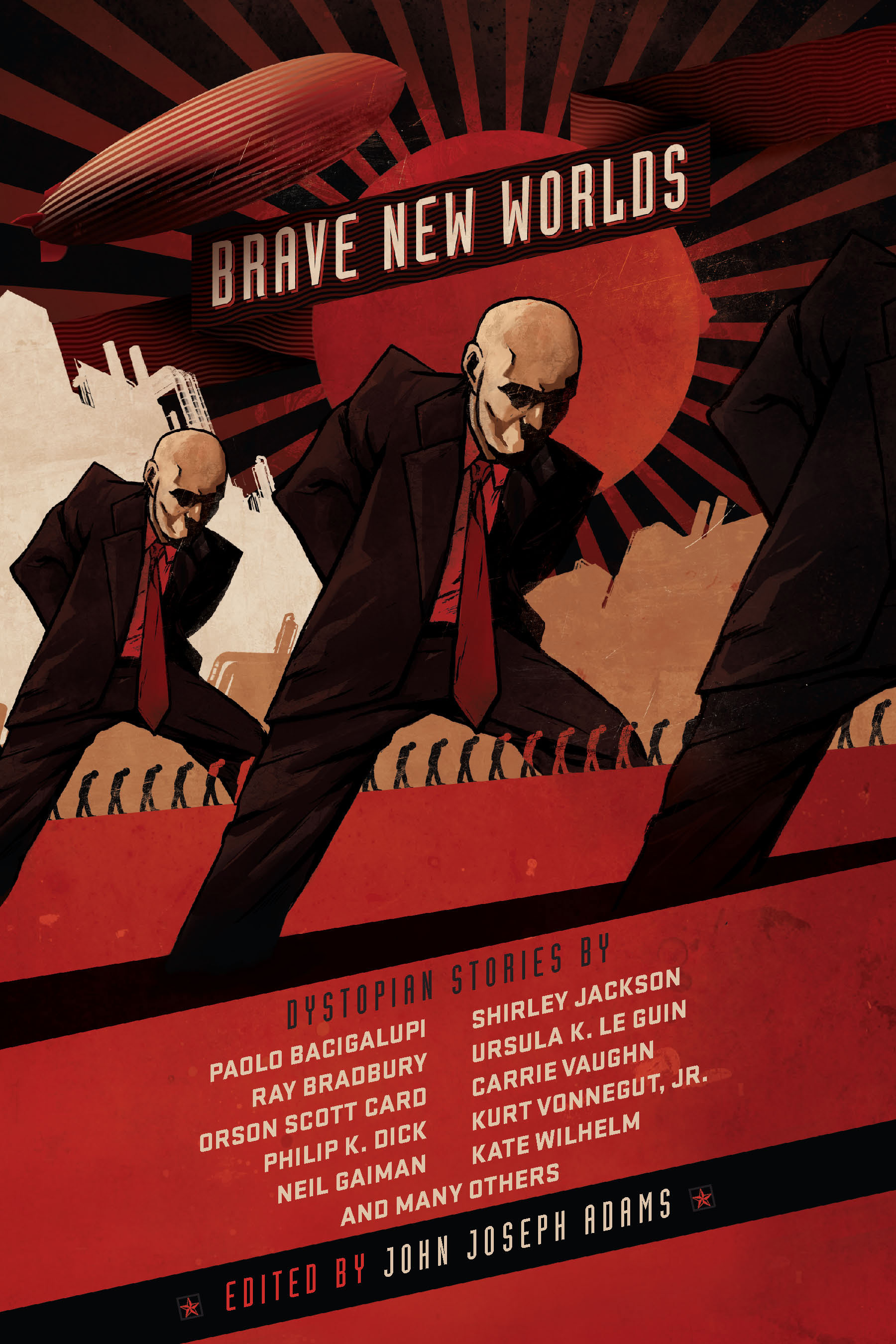 Here’s the table of contents for my forthcoming dystopian anthology, Brave New Worlds, which comes out in January.

The website for my new zombie anthology, The Living Dead 2, is now live. The url is http://www.johnjosephadams.com/the-living-dead-2.

On the site, you will find 8 stories in their entirety, available both as regular web pages and in a downloadable ebook sampler (currently available in epub and pdf format, with additional formats forthcoming from the Baen Webscriptions store). There will also be 36 different author interviews with the contributors. They’re scheduled to appear daily, starting today, with the final one scheduled to run on Oct. 4. And last, but not least, you can also read the introduction and the header notes to each story in the anthology. (Okay, maybe that IS least!)

The anthology features all-new, original stories by zombie masters Robert Kirkman, Max Brooks, David Wellington, Brian Keene, Jonathan Maberry, Carrie Ryan, John Skipp, and Mira Grant, for a grand total of FORTY-FOUR STORIES. This includes a mix of originals (27) and reprints (17) (none of which have ever appeared in a zombie anthology before).

The free stories, which you can find here, are:

I’m pleased to announce that I’ll be the fiction editor of a new science fiction online magazine called LIGHTSPEED, which will be published by Prime Books. I’ll be leaving F&SF at the end of the year to take on this new role. The press release below has all the pertinent details.

ROCKVILLE, MD, OCT. 16 — Prime Books, the award-winning independent press and publisher of Fantasy Magazine, announced today that in June 2010 it will launch a new online magazine called LIGHTSPEED (www.lightspeedmagazine.com), which will publish four science fiction short stories every month, along with an assortment of non-fiction features. LIGHTSPEED will be edited by John Joseph Adams, the bestselling editor of anthologies such as Wastelands and The Living Dead, and Andrea Kail, a writer, critic, and television producer who worked for thirteen years on Late Night with Conan O’Brien. Adams will select and edit the fiction, while Kail will handle the non-fiction.

LIGHTSPEED will focus exclusively on science fiction. It will feature all types of sf, from near-future, sociological soft sf, to far-future, star-spanning hard sf, and anything and everything in between. No subject will be considered off-limits, and writers will be encouraged to take chances with their fiction and push the envelope. New content will be posted twice a week, including one piece of fiction, and one piece of non-fiction. The fiction selections each month will consist of two original stories and two reprints, except for the debut issue, which will feature four original pieces of fiction. All of the non-fiction will be original.

LIGHTSPEED will open to fiction submissions and non-fiction queries on January 1, 2010. Guidelines for fiction and non-fiction will be available on LIGHTSPEED‘s website, www.lightspeedmagazine.com, by December 1, 2009.

John Joseph Adams (www.johnjosephadams.com) is the bestselling editor of many anthologies, such as By Blood We Live, Federations, The Living Dead (a World Fantasy Award finalist), and Wastelands: Stories of the Apocalypse. He has been called “the reigning king of the anthology world” by Barnes & Noble’s Unabashedly Bookish blog and his anthology The Living Dead was named one of the best books of the year by Publishers Weekly. In addition to his editorial work, he is also currently a reviewer for Audible.com and a blogger for Tor.com.