I, along with contributors Becky Chambers and Tobias S. Buckell, appeared on Wired.com’s THE GEEK’S GUIDE TO THE GALAXY podcast to discuss COSMIC POWERS. [link]

I’m pleased to reveal the cover for Best American Science Fiction and Fantasy 2017, and announce that this volume’s guest editor.

Our guest editor this year is Charles Yu. He is the author of the novel How to Live Safely in a Science Fictional Universe, His short fiction has also appeared in Playboy, Esquire.com, Wired Magazine and Wired.com, Lightspeed, The Oxford American, and Vice.com, among other anthologies and magazines, as well as in two collections: Third Class Superhero and Sorry Please Thank You. I’ve also published him in a number of my own anthologies, including Robot Uprisings, Dead Man’s Hand, and Press Start to Play; fun fact: if you mashed up the latter two stories, you basically get HBO’s hit TV show Westworld, for which Charlie worked as a scriptwriter and the story editor on season one. 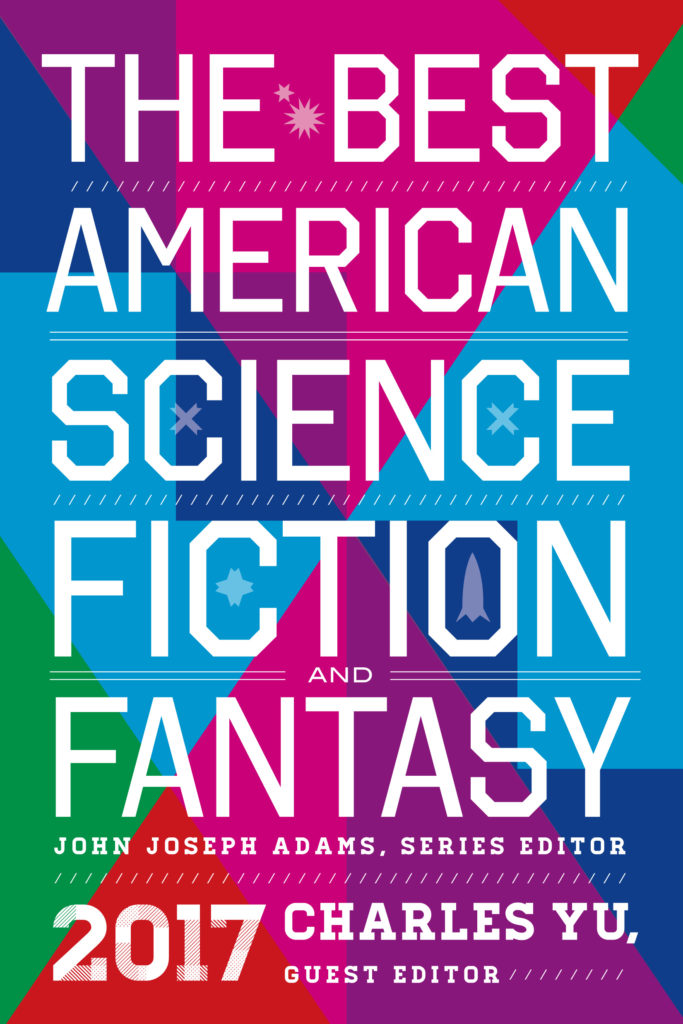 The table of contents has also been selected, but it will be kept under wraps for a while yet. (It will likely be announced some time in July.) Meanwhile, though, the book is available for pre-order:

In my role as editor of John Joseph Adams Books for Houghton Mifflin Harcourt, I just acquired two books in a new epic fantasy series by Ashok Banker. Here’s the deal memo that just ran on Publishers Marketplace:

Indian author Ashok Banker’s UPON A BURNING THRONE and THE BLIND KING’S WRATH, the first two books of an epic fantasy series (pitched as like an “Indian GAME OF THRONES”) about siblings battling for control of a vast empire while a powerful demonlord pits them against each other, to John Joseph Adams Books, in a pre-empt, for publication in 2018 and 2019 (world).

Several stories from Lightspeed, Nightmare, and the Destroy special issues have also been selected for reprint in several best-of-the-year volumes. They’re listed below, with the original venue and then the best-of-the-year editor(s)’s name following in parenthesis:

I’ll update this list if we uncover any additional such honors!

In the March 2017 issue of LOCUS, there’s a long feature interview with yours truly, in which I discuss my origins as an editor, editing my first anthologies, launching Lightspeed and John Joseph Adams Books, and all manner of things. (Surprisingly, I somehow got through the whole thing without once mentioning death metal.) If you’d like to check it out, you’ll need to buy the issue, but they’ve got some extended excerpts up on their website. To investigate either option, visit locusmag.com.

Locus Magazine released their annual recommended reading list, and we’re pleased to report Lightspeed has fifteen stories on the list, Nightmare has five stories, and my anthology What the #@&% is That? has two stories:

Congratulations to all of the above, and to everyone who made the list!

The release of the Recommended Reading List also means that voting for the Locus Awards is now open. Anyone is eligible to vote. Visit locusmag.com to cast a ballot or learn more. Voting closes April 15, 2017.

In case you missed the news, the first of the major awards have announced their lists of finalists for last year’s work, and I’m pleased to announce that Lightspeed stories “Sooner or Later Everything Falls Into the Sea” by Sarah Pinsker and “Welcome to the Medical Clinic at the Interplanetary Relay Station│Hours Since the Last Patient Death: 0” by Caroline M. Yoachim are finalists for the Nebula Award this year. Congrats to Sarah and Caroline and to everyone else on the Nebula ballot!

That brings Lightspeed’s lifetime Nebula nomination total to eighteen since we launched in June 2010. Lightspeed has currently lost sixteen in a row, so here’s hoping Sarah and/or Caroline breaks the streak! (Though of course, Alyssa Wong’s story, “Hungry Daughters of Starving Mothers,” from Nightmare won the Nebula last year, making Nightmare 1-for-1.) You can find the full slate of nominees at sfwa.org. The Nebulas will be presented at the 2017 Nebula Awards Conference, held this year in Pittsburgh, PA, May 18-21.

“The Bad Hour” by Christopher Golden, from my horror anthology co-edited with Douglas Cohen, What the #@&% is That?, made the final ballot of the Bram Stoker Awards, so big congrats to Christopher for that honor. You can find the full slate of what made the final ballot at horror.org. The Stoker Awards themselves will be presented at StokerCon 2017, which is being held in Long Beach, CA, April 27-30.

We’re doing a Goodreads giveaway for my new anthology COSMIC POWERS! Enter for a chance to win an advance review copy ahead of publication.

In my role as editor of John Joseph Adams Books for Houghton Mifflin Harcourt, I just acquired a new SF novel by Peter Cawdron. Here’s the deal memo that just ran on Publishers Marketplace:

Peter Cawdron’s RETROGRADE, about an international colony of astronauts on Mars, who have been prepared for every eventuality of living on another planet except one: What happens when disaster strikes Earth?, to John Joseph Adams Books, for publication in Fall 2017 (World).