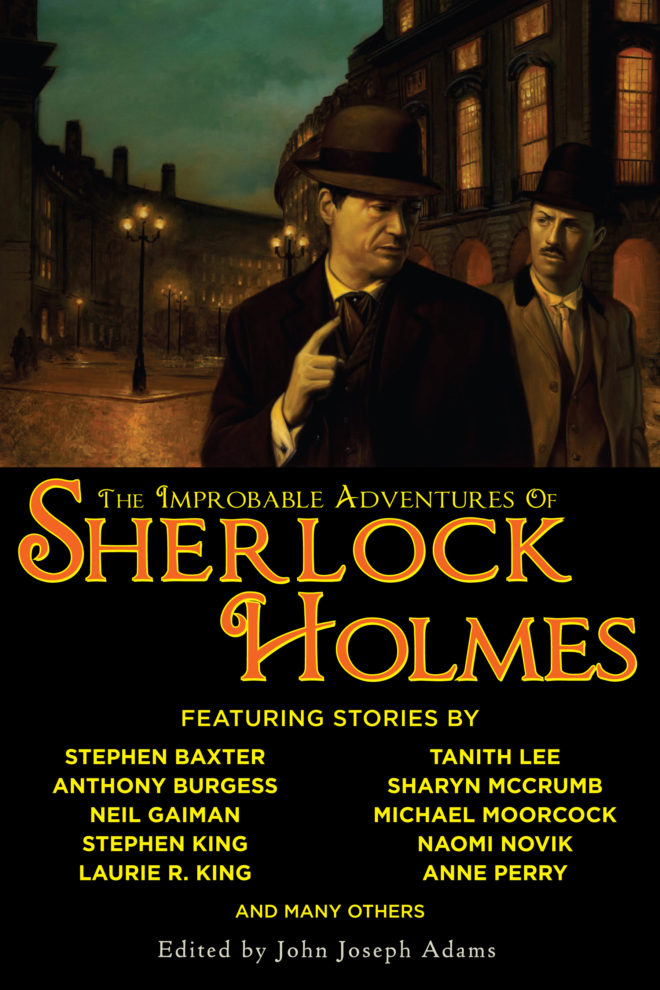 Sherlock Holmes is back! Sherlock Holmes, the world’s first—and most famous—consulting detective, came to the world’s attention more than 120 years ago through Sir Arthur Conan Doyle’s novels and stories. But Conan Doyle didn’t reveal all of the Great Detective’s adventures… Here are some of the best Holmes pastiches of the last 30 years, twenty-eight tales of mystery and the imagination detailing Holmes’s further exploits, as told by many of today’s greatest storytellers, including Stephen King, Anne Perry, Anthony Burgess, Neil Gaiman, Naomi Novik, Stephen Baxter, Tanith Lee, Michael Moorcock, and many more.

These are the improbable adventures of Sherlock Holmes, where nothing is impossible, and nothing can be ruled out. In these cases, Holmes investigates ghosts, curses, aliens, dinosaurs, shapeshifters, and evil gods. But is it the supernatural, or is there a perfectly rational explanation? You won’t be sure, and neither will Holmes and Watson as they match wits with pirates, assassins, con artists, and criminal masterminds of all stripes, including some familiar foes, such as their old nemesis, Professor Moriarty. Whether it’s mystery, fantasy, horror, or science fiction, no puzzle is too challenging for the Great Detective. The game is afoot!

Praise for The Improbable Adventures of Sherlock Holmes

The improbable intersection between Sherlock Holmes and science ﬁction is further demonstrated in this teeming collection of Holmes pastiches. […] Not all the results are fantasy. In fact, many are not, and you cannot guess which will be from the respective bylines. […] Some [stories] make one wish they could be declared ofﬁcial entries in the Holmesian canon.”  [A+ rating]

Short of revisiting Arthur Conan Doyle’s original texts, you may not have more fun with the great detective than in Night Shade Books’ collection The Improbable Adventures of Sherlock Holmes. […] From pirates to spirits, [the anthology] covers a lot of genre-fiction tropes, yet every author hews closely to Doyle’s winning, winsome storytelling style. As the game is afoot, you’re in able hands.

The Improbable Adventures of Sherlock Holmes is a good place to start or rediscover your love for one of the world’s greatest literary creations, Sherlock Holmes.

These 28 short stories are impressive in their variety and quality […] This is a substantial collection that will entertain.

—The District Messenger (The Sherlock Holmes Society of London newsletter)