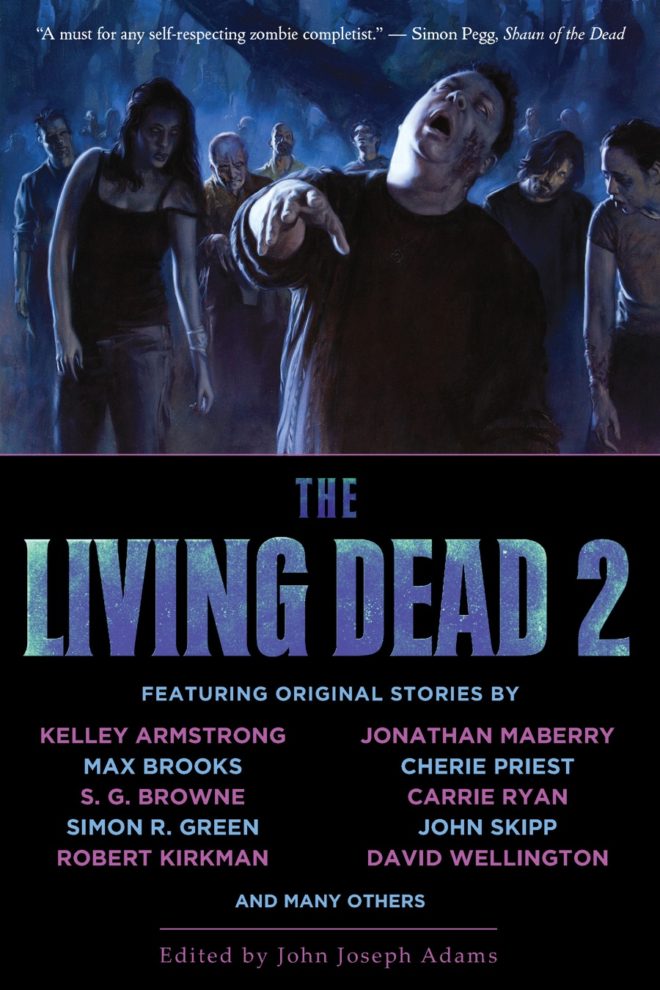 First, readers eagerly devoured The Living Dead. Now acclaimed editor John Joseph Adams is back for another bite at the apple—the Adam’s apple, that is—with 43 more of the best, most chilling, most thrilling zombie stories anywhere, including virtuoso performances by zombie fiction legends Max Brooks, Robert Kirkman, and David Wellington. From Left 4 Dead to Zombieland to Pride and Prejudice and Zombies, ghoulishness has never been more exciting and relevant. Within these pages samurai warriors face off against the legions of hell, necrotic dinosaurs haunt a mysterious lost world, and eerily clever zombies organize their mindless brethren into a terrifying army. The Living Dead 2 has more of what zombie fans hunger for—more scares, more action, more… brains. Experience the indispensable series that defines the very best in zombie literature.

Praise for The Living Dead 2

A must for any self respecting zombie completist.

—Simon Pegg, Shaun of the Dead

You don’t have to be a zombie-lover to enjoy this outstanding follow-up to 2008’s The Living Dead. Anthologist extraordinaire Adams has assembled 43 stories that showcase strong writing and imagination. Unexpected settings include a lost world with surviving dinosaurs […] and a pirate ship [while other stories] contain powerful depictions of humans facing extinction at the hands of the undead. […] For the most part, the authors convey horror through suggestion rather than graphic gore. Readers will hope for many further additions to the series even after the zombie craze passes.

There are tons of themes and riffs that I’ve never encountered before. This collection is recommended for zombiephiles of all stripes … [I]f you’re looking for a showcase for the subgenre’s versatility, or proof that short-form horror is the place to find true innovation, this is it.

I described The Living Dead as the best collection of zombie fiction stories ever collected—this follow-up anthology is even better.

I proclaimed [The Living Dead] the best zombie anthology I’d ever read. Well, there’s a new anthology due in September that actually surpasses The Living Dead–and it’s The Living Dead 2! I just want to take a moment to emphasize what an amazing achievement this is: where the original anthology comprised reprints of classic zombie tales, thereby guaranteeing a top-quality publication, The Living Dead 2 includes only original and recently-published work. Editor John Joseph Adams (who also compiled The Living Dead) demonstrates a brilliant understanding of exactly what makes a damn fine zombie tale, and deserves major kudos for the same. … There is absolutely no doubt in my mind that The Living Dead 2, and all who contributed to her, will be be well-represented across the various genre literature awards over the next year. In the meantime, zombie aficionados should place this publication at the very top of their Want List, above firearms, bottled water, and chainsaws.

The Living Dead 2 is ‘unliving’ proof that it’s the tellers, not the tales, that count. […] It’s not simply an excellent zombie anthology, or a testament to stellar horror writing. What it is, simply, is an excellent book. […] Chockablock with fantastic yarns […] breath[es] fresh life into the rotting dead. […] Delightfully diverse. […] The Living Dead 2 runs the gamut of undead storytelling: pathos and pain, blood and guts, humor and horror. It’s a sensational collection that reanimates and reinvigorates the decaying dead back to exhilarating and entertaining life. [Fangoria “Book of the Month” selection]