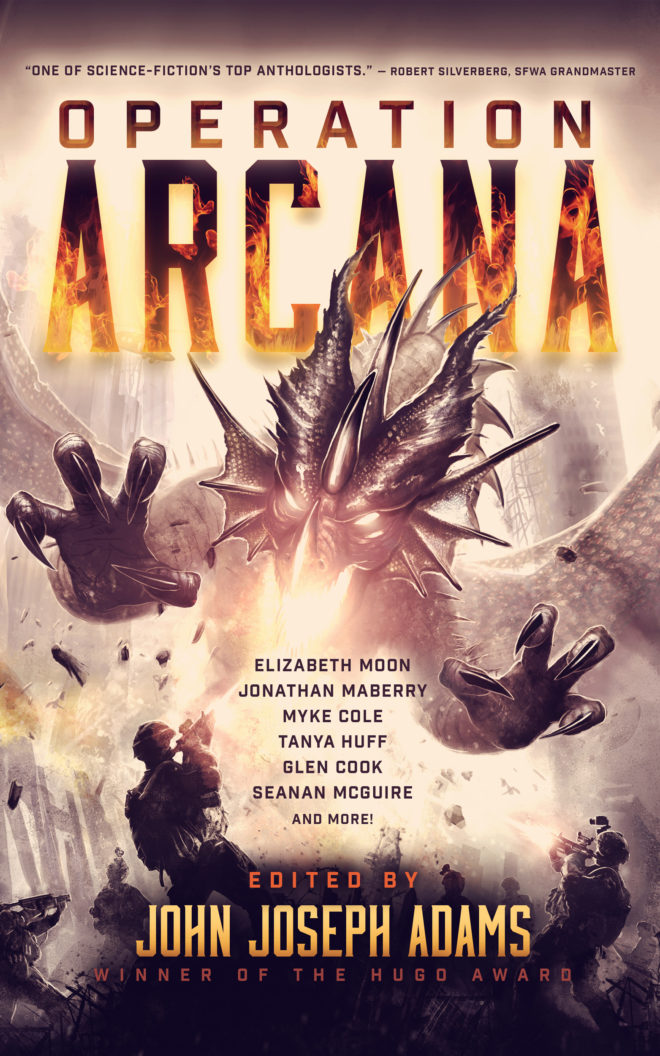 In the realms of fantasy, the battlefield is where heroism comes alive, magic is unleashed, and legends are made and unmade. From the War of the Ring, Tolkien’s epic battle of good versus evil, to The Battle of the Blackwater, George R.R. Martin’s grim portrait of the horror and futility of war, these fantastical conflicts reflect our highest hopes and darkest fears, bringing us mesmerizing visions of silver spears shining in the sun and vast hordes of savage beasts who threaten to destroy all that we hold dear.

Now acclaimed editor John Joseph Adams is sounding the battle cry and sixteen of today’s top authors are reporting for duty, spinning never-before-published, spellbinding tales of military fantasy, including a Black Company story from Glen Cook, a Paksenarrion story from Elizabeth Moon, and a Shadow Ops story by Myke Cole. Within these pages you’ll also find World War I trenches cloaked in poison gas and sorcery, modern day elite special forces battling hosts of the damned, and steampunk soldiers fighting for their lives in a world torn apart by powers that defy imagination.

These sixteen entertaining stories explore the role of warfare in fantasy, with everything from marines fighting trolls, to goblins fighting each other, to angels flying airplanes. […] This anthology rocks. [4/5 stars]

[The] stories are surprisingly deep with either very original settings or fascinating conflicts. […] On the whole, I was pleasantly surprised by the anthology. There’s far more depth in these military settings than mere conflict and a whole lot of nuance more than once.

—Fangs for the Fantasy

Operation Arcana, introduced and edited by John Joseph Adams, presents sixteen military fantasy stories. A few of these tales haunted me. Many of them entertained me. And all of them presented solid work. […] One of the best features here is the range of political outlooks on war. Another laudable thing is the inclusion of a couple of stories either told from the non-American side of a particular conflict or overtly critical of the United States. Such inclusion is an act of literary and political bravery. A third strength is the range of sub-genres: from steampunk to an homage to Tolkien to an updating of Peter Pan to golem stories. This is a very worthwhile anthology, with something for every fan of military and fantasy stories.

—King of the Nerds