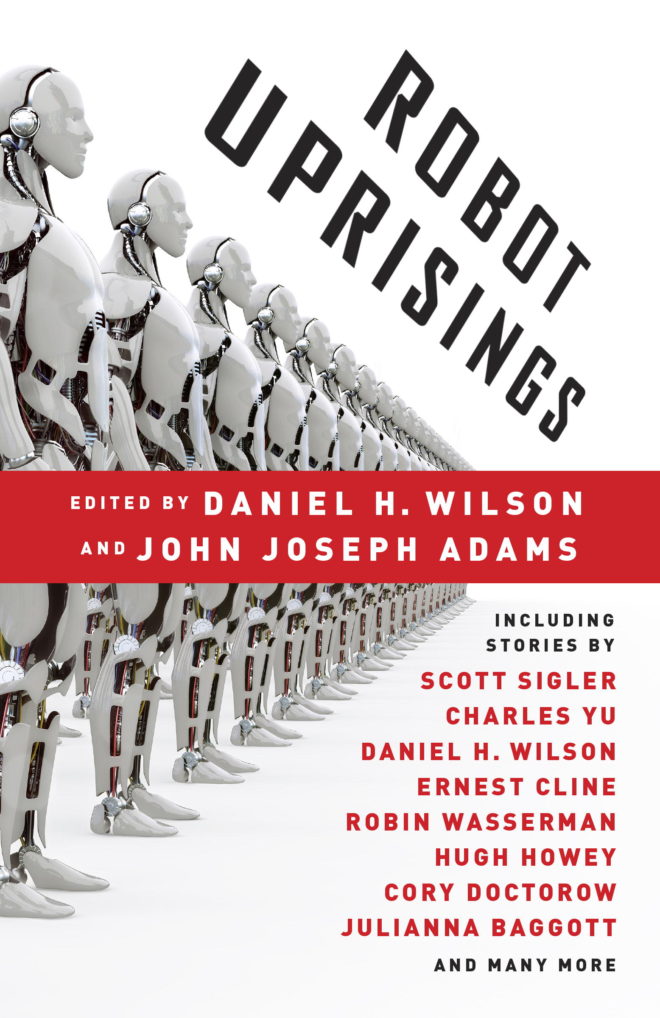 At the helm of this project are Daniel H. Wilson—bestselling novelist and expert in robotics—and John Joseph Adams—bestselling editor of more than a dozen science fiction/fantasy anthologies. Together, they have drawn on their wide-ranging contacts to assemble a talented group of authors eager to attack the topic of robot uprisings from startling and fascinating angles.

A colorful mix of cutting-edge original tales from some of speculative fiction’s leading talents […] Readers who don’t mind immersing themselves in unnerving fictional worlds that uncomfortably resemble our own, gadget-infested one will find hours of provocative entertainment here.

Fun fact: According to the Institute of Electrical and Electronics Engineers, as of 2010 there were 8.6 million robots in the world. Fun scenario: They’re all out to kill us… This anthology neatly explores that possibility, its contributors offering widely varying takes that share only the perspective that things don’t end well for Homo sapiens […] Philip K. Dick would be proud […] You’ll never look at your Roomba the same way again.

A great read […] There are so many great authors in this anthology it’s hard to say anything, but “Get this book.”

A great anthology that brings to life the most terrifying of all monsters to life, in so many different, brilliant ways by so many great new voices that you’re going to have trouble picking a favorite, like I do. Most definitely worth the time and money you’d invest in this.

Nothing taps into the paranoia of modern-day life like the idea of sentient machines, [and] Robot Uprisings channels those all-too-human feelings into some topnotch stories. […] Under the guidance of a first-tier anthologist like Adams and one of sci-fi’s resident techhounds in Wilson, Robot Uprising has a more accessible feel than many science fiction collections, and the sheer breadth of storytelling styles included makes this a great introduction to sci-fi for new readers.

This collection of short stories presents a very modern take on the robots-gone-wrong theme [and] is full of utterly human stories of loss, fear, bravery and revenge, set against an artificial and shiny future.” It also singles out Seanan McGuire’s and Alastair Reynolds’s stories as highlights in the book.

Each story contains an intriguing premise about robot sentience and shows a different aspect of the robot uprising. The best-executed tales are the most insidious. Even the light-hearted stories are creepy. Although Robot Uprisings is a collection, it feels more like a similar future prophesied by seventeen frightened oracles. […] An entertaining and disturbing romp through many possible futures.