The original editions of The Way of the Wizard and Federations from Prime Books are now out-of-print, but new editions are now available on Kindle and in  format. The new covers are by Inkspiral Design.

The Way of the Wizard: 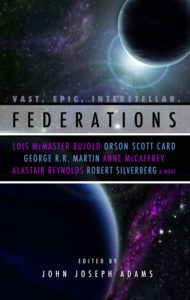 io9 has a rave review of Federations:

“Federations aims to be an anthology of short stories about interstellar civilizations — think Star Trek, Star Wars, or Isaac Asimov‘s Foundation series. But really, most of the stories in this collection are just classic space opera, with only a little discussion of the challenges and joys of multi-planetary collaboration. There’s quite a lot of space war, a fair bit of first contact, and a dash of deep-space exploration. And that turns out to be a more thrilling experience, in many ways, than a more tightly thematic collection of stories about deep-space alliances might have been. … Federations is definitely one of those anthologies that offers something for everyone. … Whether they’re taking us to deep-space battles, showing us uneasy collaboration between vastly different races, or satirizing the very idea of a benign interplanetary alliance, the stories in Federations mostly keep a very human perspective on the hugeness and strangeness of a galaxy teeming with life. And that’s reason enough to sign on to its galactic charter.”

“For this anthology of twenty-four stories, editor John Joseph Adams tasked some of the brightest luminaries of speculative fiction to write stories of vast, galaxy-spanning empires and the people that live in them. … By mixing writers with great experience in with newer authors, Adams captures both the feel of the old pulp magazines and the practical elements of the ever-changing science of astronomy and space travel. … Editor Adams has collected both the finest writers and their finest tales in the definitive volume of vast, epic, interstellar Federations.”

“It’s a testament to the strength of the editor when a mixed anthology–one that features both reprints and original stories–features a consistent selection that one has trouble discerning which is which (or ceases to care about identifying them). Federations is one of those anthologies where I open the book and each story is a treat. … Federations is an accessible science fiction anthology and features both recognizable and refreshing elements of the genre. … [O]ne of the more enjoyable books I’ve encountered in quite some time”

“More than anything, this anthology demonstrates that the vampire is not only undead but mutable, and in the best writers’ hands, a tool for analyzing our mortal frailty and resilience in the teeth of unadulterated evil and unimaginable love.”

I’ll be guest-curating the New York Review of Science Fiction reading series in July. See the press release below for details!

(directions and links below)

Usually our season runs through June, but when editor John Joseph Adams approached us with the opportunity to celebrate his new science fiction anthology, FEDERATIONS, we couldn’t resist adding an extra date to the season.

FEDERATIONS From Star Trek to Star Wars, and from Dune to Foundation, science fiction has a rich history of exploring the idea of vast interstellar societies, and the challenges facing those living in or trying to manage such societies. The stories in Federations continue that tradition, and therein you can find a mix of all-new, original fiction, alongside selected reprints from authors whose work exemplifies what interstellar SF is capable of, including Lois McMaster Bujold, Orson Scott Card, Anne McCaffrey, George R. R. Martin, L. E. Modesitt, Jr., Alastair Reynolds, Robert J. Sawyer, Robert Silverberg, Harry Turtledove, and many more. To learn more about the anthology (or read several complete stories from the book), visit the anthology’s Web site, http://johnjosephadams.com/federations.

Allen Steele is the two-time Hugo Award-winning author of the novels Orbital Decay, Lunar Descent, Chronospace, Spindrift, and many others. Over the last several years, he’s been focusing on writing and expanding his Coyote milieu, of which his story in Federations is a part. The most recent novel in the Coyoteverse, Coyote Horizon, came out in March, and will be followed by Coyote Destiny. Steele is also a prolific writer of short fiction, with four published collections, and a new one—The Last Science Fiction Writer—on the way. His stories have appeared in the magazines Asimov’s Science Fiction, Analog, The Magazine of Fantasy & Science Fiction, Omni, Science Fiction Age, and in numerous anthologies. His Web site is http://allensteele.com.

Genevieve Valentine’s fiction has appeared in or is forthcoming in Strange Horizons, Journal of Mythic Arts, Fantasy Magazine, Farrago’s Wainscot, Sybil’s Garage, and Escape Pod. She is a columnist for Tor.com and Fantasy Magazine. Her appetite for good costumes and bad movies is insatiable, obsessions she tracks on her blog, http://glvalentine.livejournal.com.

John Joseph Adams is the editor of the anthologies Federations, The Living Dead, Seeds of Change, and Wastelands: Stories of the Apocalypse. Forthcoming work includes the anthologies Brave New Worlds, By Blood We Live, The Improbable Adventures of Sherlock Holmes, The Living Dead 2, The Mad Scientist’s Guide to World Domination, and The Way of the Wizard. He is also the assistant editor at The Magazine of Fantasy & Science Fiction and a columnist for Tor.com. To learn more, visit his Web site at http://johnjosephadams.com/.

The New York Review of Science Fiction Reading Series is wrapping up its 19th season of providing performances from some of the best writers in science fiction, fantasy, speculative fiction, etc.  The series takes place the first Tuesday of every month at the South Street Seaport Museum.  We have been known to move from one venue to another within the museum, so check each time.  We are currently at 12 Fulton Street on the 4th Floor.  Admission is by a $5 donation.  If circumstances make this a hardship, let us know and we will accommodate you.  The producer and executive curator is radio producer and talk show host Jim Freund.
—
WHEN:
Tuesday, 7/7/9
Doors open at 6:30 — event begins at 7
WHERE:
The South Street Seaport Museum
12 Fulton Street — 4th floor
http://maps.google.com/maps?f=q&hl=en&geocode=&q=12+fulton+street,+ny
HOW:
By Subway
Take 2, 3, 4, 5, J, Z, or M to Fulton Street; A and C to
Broadway-Nassau. Walk east on Fulton Street to Water Street
By Bus
Take M15 (South Ferry-bound) down Second Ave. to Fulton Street
By Car
From the West Side: take West Street southbound. Follow signs to FDR
Drive Take underpass, keep right – use Exit 1 at end of underpass. Turn
right on South Street, six blocks.
From the East Side, take FDR Drive south to Exit 3 onto South Street
Proceed about 1 mile.
By Boat
http://nywaterway.com/ferry/terminals/wallstreet.asp

StarShipSofa has posted a podcast of Jeremiah Tolbert’s story from Federations,  “The Culture Archivist,” which Tolbert describes as his take on “what if the Star Trek Federation were actually capitalist bastards.”

In other Federations-related news, contributor Catherynne M. Valente (“Golubash, or Wine-War-Blood-Elegy”) has developed a cool an unique piece of work based on her story. It’s a “ReadMix,” which is basically a song with text from the story being read in the background, all mixed and such to create a piece of music. The song is called “Wine is a Story,” and you can read more about it and listen to it here.

New major review of Federations, and it’s a good one. In a starred review, Publishers Weekly calls it “breathtakingly rich,” and concludes: “Superior writing, fantastic storytelling and creative adherence to the theme will keep readers enthralled.” Read the whole review here.

The May 2009 issue of Locus has two reviews of Federations.

The first, from Gardner Dozois, says: “[Federations is] filled with good solid stuff, and a few stories are a bit better than that.”  Gardner goes on to single out John C. Wright’s story, “Twilight of the Gods,” as the best story in the book.

The other review is from Rich Horton, who says: “Where the book shines is with the original stories, many of which are by quite new writers. … The mix—of  old and new stories, of newer and more established writers, and of tones and styles—is vigorous and impressive.” Horton also offers some nice commentary on a few of the stories, for instance, calling Jeremiah Tolbert’s “The Culture Archivist” “very fine” and saying that it “modulates from an almost Strossian romp to a serious examination of its central issue.”

Come see me debate the merits of science fiction’s best starship captains at the Star Trek Smackdown on May 12 at the Paley Center (formerly known as the Museum for Television and Radio) in New York.

O Captain! My Captain! Who’s the greatest leader in the history of science fiction on television? We’re pitting Captain James T. Kirk of Star Trek against your choices, based on the results of our Star Trek Smackdown poll. We’re beaming aboard a panel of sci-fi experts to debate the pros and cons of all the leading contenders, but we also want to hear what YOU think, so set your coordinates for the Paley Center and come join the debate.

Bring your tricorders to help you answer some trivia questions to win some DVDs and other special prizes! Costumes welcome!

Tickets include admission to the Paley Center (free to Members, $10 for non-members).

Hope to see you there!