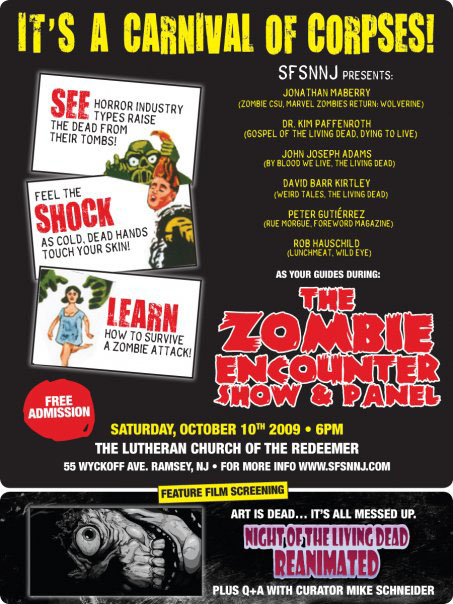 Reviewer Paul Goat Allen seems to be my biggest fan. In his recent blog post for Barnes & Noble’s BN.com, “The Candy Man Can: Or Why John Joseph Adams is Genre Fiction’s Willy Wonka,” he said so many kind things about me and my anthologies you’d think he was on the Night Shade payroll.

And as if that wasn’t cool enough for one day, Allen’s article also inspired some…fan art?

The Living Dead has been nominated for the World Fantasy Award for Best Anthology! This is a tremendous honor, and I’m hugely thrilled.

Visit the World Fantasy Awards web site for the full list of nominees.

Over at Tor.com, we’ve got a zombie caption contest going on, with the prizes being a copy of my anthology The Living Dead AND a copy of the video game Left 4 Dead.

For those of you who’d like to own a nice hardcover edition of The Living Dead, now’s your chance. The Science Fiction Book Club edition of the book is now available. I haven’t seen a copy of it yet myself, but now that I know it’s ready I hope to be holding a copy soon. Anyone seen it yet?

By now most of you have probably heard about Night Shade Books’s partnership with Baen Books to distribute Night Shade titles as e-books via Baen’s WebScriptions store. Well, now there’s even more reason to rejoice: You can now buy e-book versions of The Living Dead* and Wastelands, for just $6.00 each.

* Please note that the e-book version of The Living Dead does not include the following stories: Dan Simmons, "This Year’s Class Picture," Sherman Alexie, "Ghost Dance," and Douglas E. Winter, "Less than Zombie."

Living Jacket Studios has just completed the book trailer for The Living Dead and has now released it into the wild. I’ve got it embedded over on the anthology’s site, but you can also view it on YouTube, which you should go do and tell all your friends about it. And what the heck, I’ll put it here too:

To celebrate the book trailer’s release, I’ve posted the latest (and last) batch of free fiction we’ll be featuring on the site. With these five new stories, that brings the grand total of free fiction on the site to 11 whole stories, plus 10 excerpts, not to mention all the interviews and other bonus content. But remember, even if you read all the ones here on the site, there’s still 23 other stories in the book you won’t find here, so you should go buy a copy for yourself, and maybe one for everyone on your holiday shopping list.

Here are the new additions to the site:

In Beauty, Like the Night by Norman Partridge
HTML | PDF | Mobipocket

A couple new reviews of The Living Dead:

SFF World: “To call this volume anything other than must have would be selling it short, the stories range a great number of years and capture many unique voices on one of the seminal images and iconic characters of Horror fiction and is something I know I’ll be pulling down every Halloween. This impressive, massive anthology would make a great gift to give by the light of the Jack o’ Lantern.”

SF Signal: “The zombie anthology for the new millennium.”

Fairfield Weekly: “A comprehensive collection on the subject and a joyful celebration of all things flesh-eating and re-animated.”