In July 2013, I served as the “editor-in-residence” for the Codex Writing Group, which meant basically I was asking a month-long AMA (“Ask Me Anything”) interview. With Codex’s permission, I’m re-posting the Q&As here on my blog. The questions were all provided by members of Codex.

When you edit your anthologies, how do you decide the order in which to present the stories? Are there certain “rules of thumb” you follow, such as “open strong, close long”? Is there value to opening or closing the anthology with a piece from a well-known author? Any other tips you’d be willing to share?

I actually just answered this in an interview recently, so I hope you don’t mind me copying and pasting that here:

That’s definitely more of an art than a science and, as a result, is kind of hard to explain the method to my madness. Essentially I do it by feel; I want there to be a certain flow to the anthology, and everything I do is an attempt to achieve that flow. I like to lead off and end the book with two of the strongest stories (with the final story also ideally providing a lot of emotional impact that will resonate with the reader long after they put down the book). I also tend to put one of the other strongest stories somewhere around the middle of the book–what I think of a ‘tentpole’ story. With those three in place, I then go about trying to achieve my desired flow. I think about each story and what it would be like to read that story and then to read the story after that, and so on. Another factor is story length; I find that it’s usually best for the flow of the anthology if you don’t clump too many long stories together, so in my spreadsheet where I have all the stories listed, I have all their word counts there so I can see that as I’m sorting the contents out, and I try to balance out longer stories by running shorter ones afterward. Speaking of my spreadsheet, that’s what I use to actually figure out the order. I just have a column for the table of contents order, and in that column I put a number for the ‘slot’ that story is slated for, that way I can sort the spreadsheet and have it thus put the stories in TOC order.

But yes, opening (and closing) strong is always a good idea. Closing with a bigger name is nice, but not required by any stretch; I think it’s more important to close with a very strong story that will have that emotional impact I mentioned. And in some cases, there are stories that just feel like an appropriate thematic capstone to all of what’s come before in the book.

Ultimately, I’m not really sure how many people actually read anthologies in order, so it kind of often feels like a lot of mental effort wasted. But, hell, they’ve got to go in SOME order, so might as well put them in the best order possible for that Ideal Reader out there who reads anthologies in order. :) 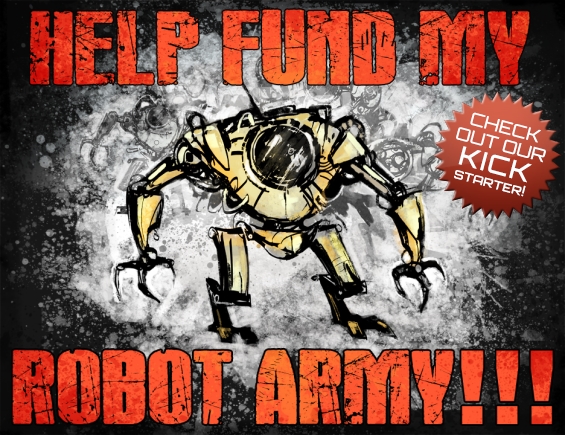 From October 1 – October 31, I’ll be running a Kickstarter campaign for a new project called HELP FUND MY ROBOT ARMY!!!, an anthology of improbable, futuristic, magical, & alternate-world crowdfunding projects. Please check it out, consider backing it, and, if you’re so inclined, spread the word!