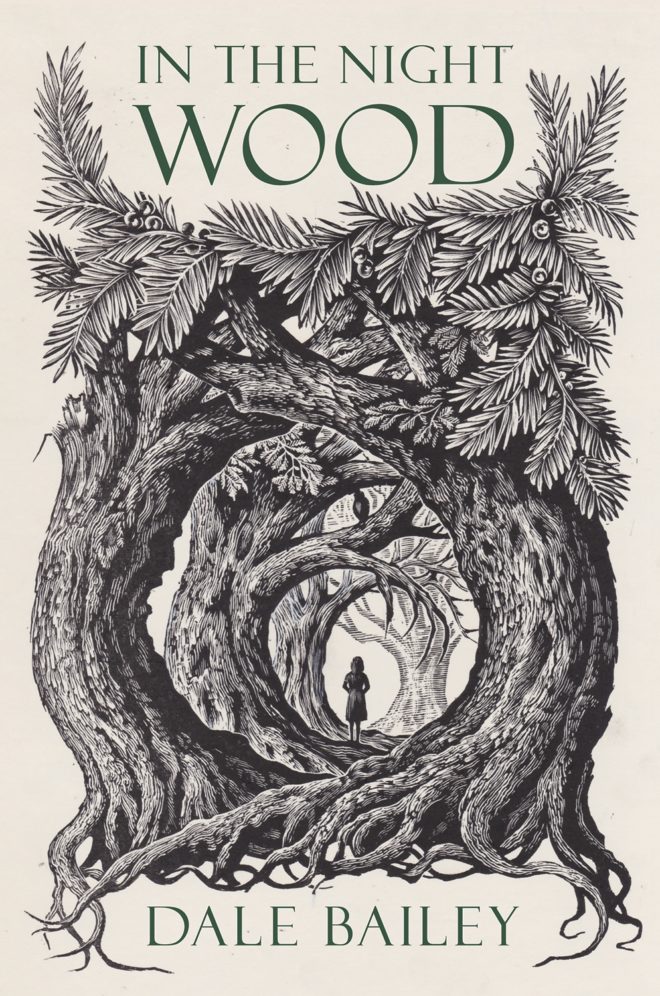 In the Night Wood

American Charles Hayden came to England to forget the past. Failed father, failed husband, and failed scholar, Charles hopes to put his life back together with a biography of Caedmon Hollow, the long-dead author of a legendary Victorian children’s book, In the Night Wood. But soon after settling into Hollow’s remote Yorkshire home, Charles learns that the past isn’t dead.

In the neighboring village, Charles meets a woman he might have loved, a child who could have been his own lost daughter, and the ghost of a self he thought he’d put behind him. And in the primeval forest surrounding Caedmon Hollow’s ancestral home, an ancient power is stirring. The horned figure of a long-forgotten king haunts Charles Hayden’s dreams. And every morning the fringe of darkling trees presses closer. Soon enough, Charles will venture into the night wood. Soon enough he’ll learn that the darkness under the trees is but a shadow of the darkness that waits inside us all.

Dale Bailey is the critically-acclaimed author of seven books, including The End of the End of Everything and The Subterranean Season.  His story “Death and Suffrage” was adapted for Showtime’s Masters of Horror television series. His short fiction has won the Shirley Jackson Award and the International Horror Guild Award, has been nominated for the Nebula and Bram Stoker awards, and has been frequently reprinted in best-of-the-year anthologies, including Best American Science Fiction and Fantasy. He lives in North Carolina with his family.

Praise for In the Night Wood

Every story is a ghost story, Bailey tells us. But not every ghost story is as haunting as this one. Nor as luminously written, literate, absorbing, transporting, and all-around excellent. I couldn’t put it down.

—Karen Joy Fowler, bestselling author of We Are All Completely Beside Ourselves

Bailey’s novel has every aspect of gothic horror: the drafty manor, the shady servants, the tortured protagonists. The writing is dense with allusions and details, the narrative twisting and turning in the same way the Night Wood distorts the senses of anyone who wanders into it […] A modern gothic horror done right.

A gothic tale of sinister woods, dark bargains, and child sacrifice. […] Bailey weaves literary allusions and folkloric motifs together with gorgeous prose to create this grief-imbued story [which] will appeal to fans of psychological horror, fairy-tale retellings, and metanarratives.

The book is an amalgamation of meta-textual hints and haunted houses and horror tropes, but those blend together with the house’s new owner and her husband to create something that is greater than the sum of those parts. […] The pages fly past. […] It falls from fantasy and guilt into fantasy and horror, and the guilt and the horror are overlapped and combined. […] I loved reading this book.

—The Magazine of Fantasy & Science Fiction

Dale Bailey has written a literary puzzle box that deftly mixes the scary, nasty folktales of the 19th century and Daphne du Maurier’s classic “Don’t Look Now.” In the Night Wood is an affecting, weighty, and haunting book about the shackles of grief.

—Paul Tremblay, author of A Head Full of Ghosts and The Cabin at the End of the World

Bailey infuses his eighth novel with a sinister foreboding that excellently villainizes its bucolic English setting. […] With the discovery of a cipher and the help of a local historian who has a daughter uncannily similar to his own, Charles realizes the horrors of “In the Night Wood” are closer to fact than fiction. Bailey’s eerie prose centers readers firmly and successfully in his seductive and frightening night wood.

In the Night Wood taps into the oldest, darkest roots of the fairy tale tradition, presenting the story of a family in crisis while steered by the pagan energies of a wilder age. It is beautiful, heartbreaking, and inspiring. Once again, Dale Bailey proves he’s among the best writers we have.

In the Night Wood contains echoes from works by Alan Garner, Robert Holdstock and other classic fantasists—there is a patch of ancient English woodland haunted by a legendary horned figure, a strange, half-forgotten book from the past, a troubled main character who seems doomed to play  a role in an ancient tragedy—but Dale Bailey manages to bring all the mythic tropes to fresh life with his evocative prose, psychological insight, and a powerful narrative of growing menace that defies you to put it down before the end.

—Lisa Tuttle, author of Lost Futures and The Silver Bough

In the Night Wood is a wonder: literary, intriguingly supernatural, and all too human. A must read for anyone who as a child wanted to find a magic wardrobe to explore or a rabbit hole to fall down only to realize as an adult that those whimsical childhood adventures have a darker side.

—Molly Tanzer, author of Creatures of Will and Temper and Vermilion

Elegantly written, In the Night Wood paints a moody portrait of a marriage threatened by betrayal and loss over the backdrop of a strange wood, mysteriously vanishing children, the legend of a horned king, and a children’s story that might be more than just a story.  Bailey builds his world with great care, slowly and carefully drawing both you and the characters in, revealing some pieces of the puzzle only gradually. By the time you realize where the story is going, he’s already hooked you:  you couldn’t escape even if you wanted to.

—Brian Evenson, author of A Collapse of Horses

Hauntingly written and compellingly structured, Dale Bailey’s novel pulls you irresistibly along to an ending of hard-won understanding and uneasy release.

—Michael Bishop, Nebula-winning author of Other Arms Reach Out to Me

The Green Man meets The Shining in this mix of ratcheting suspense, complex and sympathetic characters, and a vividly eerie setting. In the Night Wood is a terrific thriller, with literary heft besides.

In the Night Wood begins with a tragic loss and quickly develops into a mystery involving an estate, the history of the forest surrounding it, and a strange book written by the estate’s former owner. The mystery is compelling but the heart of Dale Bailey’s latest novel is the damaged relationship between grieving parents. Conquering their guilt and salvaging their love for one another depends on their ability to untangle the mystery. This is a heady combination of natural and supernatural influences, clues scattered by an enigmatic ancestor, and local legends both feeding and deriving from a work of fiction. Together these elements create resonance and urgency in a story about the complex workings of the human heart.

—S.P. Miskowski, author of I Wish I Was Like You

Fairy tales are not just for kids. Charles Hayden’s life, personal and professional, has tail spinned into a dark place. He and his wife have journeyed to England in hopes of finding solace, and repairing damage. Charles is studying the author of a classic Victorian children’s book, called In the Night Wood.  This academic effort turns into a creepy, scary parable, that might still be affecting the world. I loved how the author used references to British classics, gave the story almost a touch of realism. But readers will hope that it is not real!