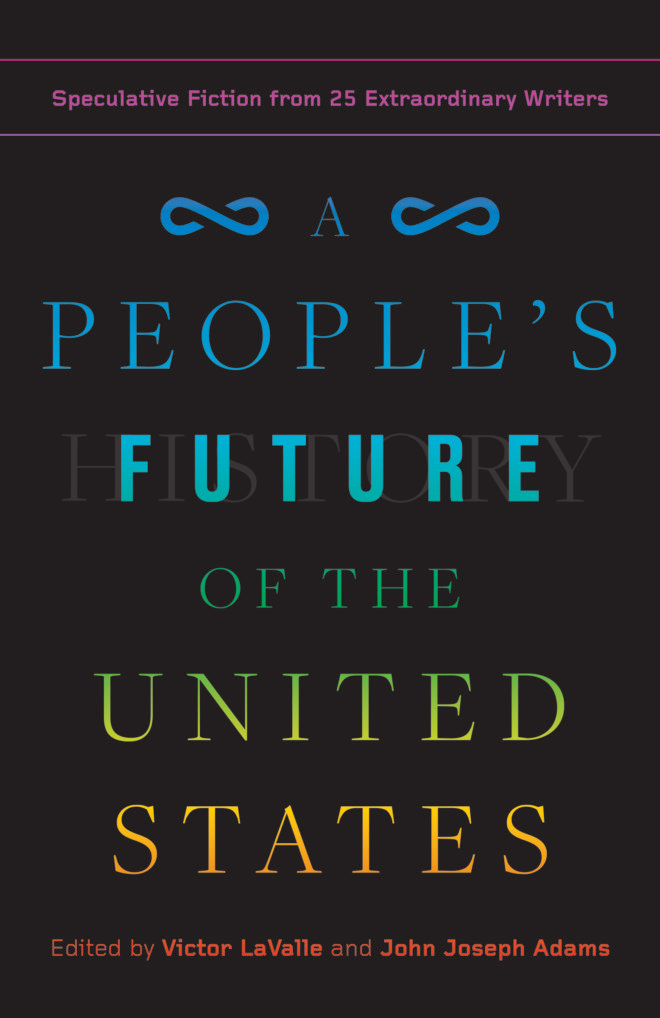 A People’s Future of the United States

In these tumultuous times, in our deeply divided country, many people are angry, frightened, and hurting. Knowing that imagining a brighter tomorrow has always been an act of resistance, editors Victor LaValle and John Joseph Adams invited an extraordinarily talented group of writers to share stories that explore new forms of freedom, love, and justice. They asked for narratives that would challenge oppressive American myths, release us from the chokehold of our history, and give us new futures to believe in.

They also asked that the stories be badass.

The result is this extraordinary collection of twenty-five stories that blend the dark and the light, the dystopian and the utopian. These tales are vivid with struggle and hardship—whether it’s the othered and the oppressed, or dragonriders and covert commandos—but these characters don’t flee, they fight.

A People’s Future of the United States is a call to arms for anyone who believes in our power to dream a just world. Thrilling, inspiring, and a sheer joy to read, this anthology reminds us of the life-giving power of storytelling.

Praise for A People’s Future of the United States

Th[is] excellent collection […] present[s] narratives in which the powerless openly resist oppression [and features] spaces of resistance that are often darker, and more frightening, than reality. […] One leaves A PEOPLE’S FUTURE OF THE UNITED STATES understanding that imaginary worlds can create a heaven or a hell, depending on your ideology. As N.K. Jemisin, whose work appears in this collection, [says]: “Imagination is where revolution begins.”

An outstanding collection written by 25 heavy hitters of speculative fiction, offering dazzling and often chilling glimpses of an uncertain future in which America teeters on the brink. […] This bold collection is full of hope, strength, and courage, and will be welcomed by readers looking for emotional sustenance and validation of their experiences in a challenging time.

Highly recommended for any speculative fiction reader, particularly those interested in the possibilities of science fiction to critique the present through visions of the future.

Smart, gutting, speculative fiction examining the trajectory of America by some of the best brains in the business.

From a veritable Who’s Who of contemporary American speculative writers [the anthology is] a stonking success. N.K. Jemisin’s glorious “Give Me Cornbread, or Give Me Death”, Malka Older’s inventive “Disruption and Continuity” and Omar El Akkad’s heart-breaking “Riverbed” are all utterly exceptional works. These three alone are worth the price of a copy. […] This is not twenty-five individual and discrete voices; this is a holistic shout. And, let’s be clear, A People’s Future is undeniably a shout. It is not a debate or a discussion: it is a full-throated, blood-curdling scream. […] Undeniably successful […] but the beautiful tragedy of A People’s Future is that it is entirely plausible… and fundamentally terrifying. A People’s Future is a powerful anthology. […] As a vision—as a scream—A People’s Future is potent and resonant, with the potential to echo for years to come. For those it is speaking to, A People’s Future offers not hope, but belonging. A shared sense of outrage. A unifying call to arms. And, above all, the reassurance that now, then, and forever, you are not alone. As LaValle says: “The future is ours. Let’s get it.”

This collection of 25 stories from speculative fiction’s sharpest voices presents visions of future Americas that are born, bloody and aching, from the peril and difficulty of this present moment. […] They are, in majority, not comfortable or easy futures — nor would one expect them to be, derived as they are from the second year of the Trump presidency and its pervasive damage to the marginalized of the United States. Several of these stories are brutal in their plausible despair — but all of them are rich with an undercurrent of, if not resistance, then the profound resilience of human beings, particularly those who have too often been denied rights and voices. As a whole, the collection challenges the ideas of who the people of the future United States might be — and therefore also challenges assumptions about who the people of the United States are now. […] A People’s Future of the United States is not a simple read, nor a comfortable one. It begins from the premise that our current precarious situation will almost certainly get much worse. But within all of the futures contained here, there remain people, people whose marginalizations, whose existence on the edges of what some ideologies would think of as America, have given them profound depths of resilience. These futures are not easy. But they show us how we too might find ways to live, and live well, no matter what is coming.

A People’s Future of the United States packs a lot of literary power into its pages. It features 25 stories by some of the most acclaimed working writers of speculative fiction [and it] delivers on all counts, serving up a wide and varied selection of stories that are sometimes hopeful, occasionally cautionary, and often flat-out terrifying. […] These are what-if? tales filled with provocative ideas and complex characters, and each one burns with both purpose and imagination. […] True to its stated purpose, the anthology also offers hope—in each story, we encounter people who resist the corrupt powers that be in any way they can. […] A People’s Future of the United States is a memorable and thought-provoking. Its writers paint vivid, often frightening visions of the futures we might be hurtling toward, and give us hope that the worst of them can be resisted, or at the very least, survived.

Stories that look forward from our current fractured place and project just how our societal journey might progress if we remain on certain paths. There are bleak prophecies and optimistic hopes, tragedies and triumphs – all of them springing from similar starting points. These tales come to us from the speculative fiction elite, phenomenal talents gifted with both big ideas and stellar storytelling chops. […] It’s rare for any collection, let alone one of this size, to be completely devoid of duds; most of these sorts of assemblages have at least a couple of pieces that don’t quite measure up. However, that does not seem to be the case here – editors LaValle and Adams clearly knew both precisely what they wanted and how to convey that precision to the authors with whom they were working. The end result is a rock-solid collection whose quality never wavers – every story is a standalone reward. […] The truth is that every single one of the 25 tales put forth in “A People’s Future of the United States” deserves your attention. It’s a different kind of American Dreaming being done here. This kind of provocative and passionate writing illustrates just how valuable and powerful speculative fiction can be; these stories help show who we are by looking toward who we might become.

Some humans may forever be marred with an inclination toward hate in all its shades, but it is the responsibility of the other side, those who believe in equality, to continue the good fight, in both small and large ways. A People’s Future features representations of these myriad means of resistance (as well as, naturally, that other, deeply important form of representation), making it not only an essential read for these current troubled times, but for all those troubled times yet to come.

A literary crystal ball. Like the best sci-fi, this is a well-crafted collection that expertly highlights multiple points of view, orientations, and backgrounds, and does it with powerful and engaging stories that will make the reader think about their relationship with this country.

A good book for our times. One that encourages, reflects, investigates, and entertains. Filled with top notch talent, I recommend this anthology for anyone who’d like to spend some time looking forward as they try to figure out our present.

A timely compilation that highlights the hope and anxiety of the current political climate.

A collection of stories about marginalized people, set in the near future [with] a lineup that reads like a who’s who of current science-fiction writers. […] There are great stories [and] those who feel optimistic about the future may find stories of fighting against oppression uplifting [in this assortment of] topical, speculative tales.

This book is a writhing, furious bag of words, genres, bleeding organs, weapons, and howls thrown at the misery of our world.

“Incredibly varied and incredibly exciting. […] Every [story] is thrilling, inspiring, and delightful.”