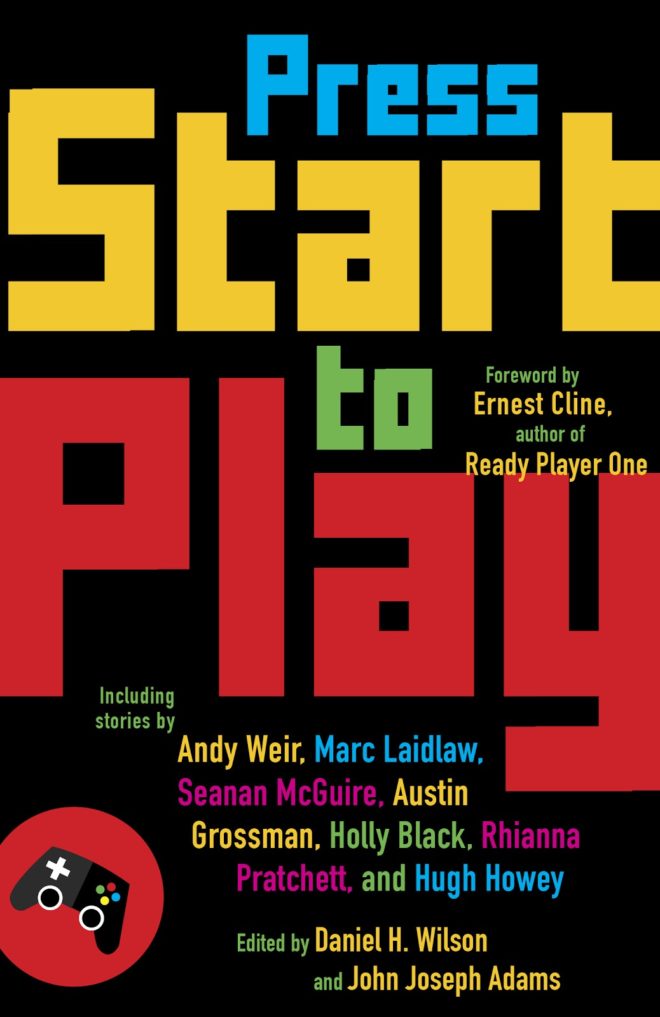 Your inventory includes keys, a cell phone, and a wallet. What would you like to do?

Praise for Press Start to Play

There are some fascinating takes on gaming in this short story collection. If you want some interesting, adult takes on aspects of your favorite hobby that you may never have thought of, this is worth picking up.

Even those who doubt the editors’ claim that “video games have come to play a vital role in modern human civilization” will be enthralled by these 26 stories exploring what video gaming does for and to its participants. […] Wilson and Adams have assembled a provocative assortment of thoughtful stories, making a valuable contribution to ongoing conversations about the future directions of video gaming.

I’m hooked on John Joseph Adams’ short story anthologies. […] It’s a fantastic group of authors […] and the stories are as various and diverse as videogames themselves. […] If you like videogames and science fiction, you’ll find many stories here that will capture your imagination.

There are many good tales here and a couple of standouts […] Sci-fi fans will find it well worth their while.

There’s plenty of variety in this volume, from outright comedy to deeply meaningful stories questioning the economics and ethics of games and the gaming industry. Whether you’re a hardcore gamer or an occasional dabbler, you’ll find much enjoyment and even some food for thought between these covers.

Press Start to Play did not disappoint. It was filled with video game related short stories, some of them horror, some science fiction, and some fantasy. Sometimes the video games would even converge with real life, and those were the ones that I ended up loving most, because they were creepy! This was also my first anthology read, and I have to say that I now absolutely love short stories. […] If you are a video game fan or love reading books about video games, this is the book for you. Press Start to Play is a new favorite that I will never stop recommending.

Press Start to Play makes me excited for the future of video game-related literature, and I think it’s a must-buy for fans of Ready Player One and video game stories.

One of the best anthologies published in 2015. […] Press Start to Play is highly recommended and comprised of so many brilliant tales, one cannot help but long for a second installment once unlocking the accomplishment of finishing this book.