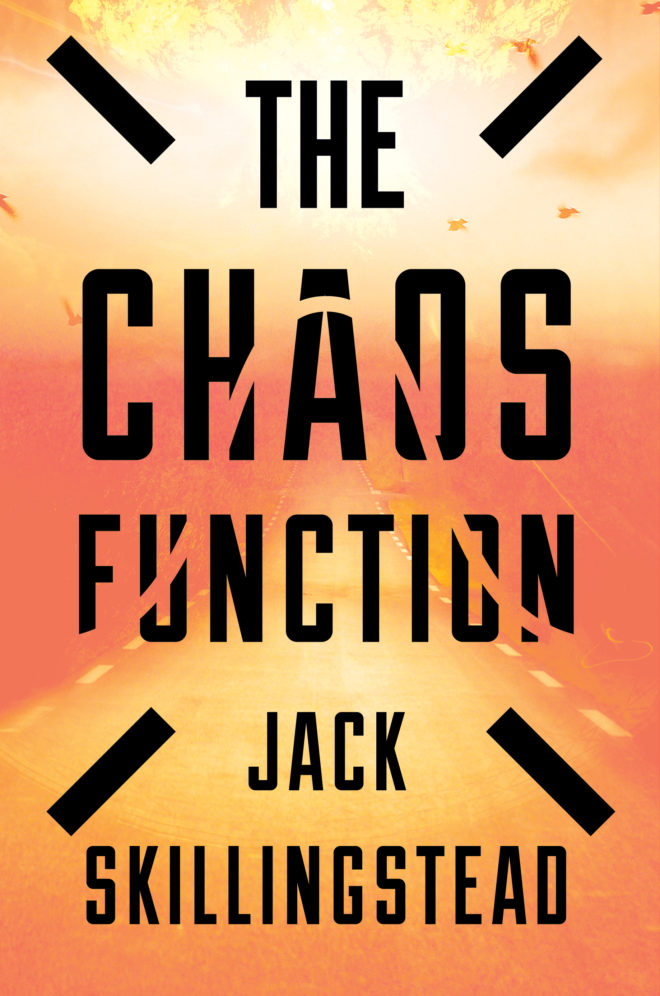 For readers of the best-selling novels Sleeping Giants and Dark Matter, The Chaos Function is an intense, high-stakes thriller with a science-fiction twist that asks: If technology enabled you to save the life of someone you love, would you do so even if it might doom millions?

Olivia Nikitas, a hardened journalist whose specialty is war zones, has been reporting from the front lines of the civil war in Aleppo, Syria. When Brian, an aid worker she reluctantly fell in love with, dies while following her into danger, she’ll do anything to bring him   back. In a makeshift death chamber beneath an ancient, sacred site, a strange technology is revealed to Olivia: the power to remake the future by changing the past.

Following her heart and not her head, Olivia brings Brian back, accidentally shifting the world to the brink of nuclear and biological disaster. Now she must stay steps ahead of the guardians of this technology, who will kill her to reclaim it, in order to save not just herself and her love, but the whole world.

Jack Skillingstead’s Harbinger was nominated for a Locus Award for best first novel. His second, Life on the Preservation, was a finalist for the Philip K. Dick Award. He has published more than forty short stories to critical acclaim and was short‑listed for the Theodore Sturgeon Memorial Award. His writing has been translated internationally. He lives in Seattle.

Praise for The Chaos Function

Set in a not too distant war zone, investigative journalist Olivia Nikitis has the power to change the past and reshape the future. […] Highly recommended for readers of dystopian stories, time-travel scenarios, and endings that cause them to rethink the entire book.

[A] fun, thrilling, and powerful read that is one part action thriller, one part sci-fi tale, and one part Groundhog Day. […] You get some action, some exciting and imaginative twists about the nature of the probability machine, and a conclusion that’s both epic and intimate. The Chaos Function delivers both action-packed thrills and a profound meditation on the idea of choices and consequences.

[A] harrowing sci-fi thriller. […] With lean prose, Skillingstead paints a realistic and terrifying portrait of society’s swift unraveling in the face of disaster, and Olivia’s emotional vulnerability mirrors the chaos inherent in the world around them. This crackling road trip through the apocalypse offers thrills all the way to its explosive, satisfying finale.

Skillingstead deftly balances frenetic pacing and characters’ philosophical debates on parallel futures, the butterfly effect, and probability choices in a dramatic and suspenseful story supported by an intelligent, witty, and reluctant hero. His exploration of themes related to the manipulation of time will attract fans of Philip K. Dick, and the novel will also appeal to readers who enjoyed Michael Crichton’s sf thrillers and viewers of Amazon’s The Man in the High Castle.

The horrifying but mundane end(s) of the world are rendered with powerful bleakness—making moments of human tenderness and kindness shine all the brighter.

The Chaos Function invites us to think about the tangle of paths that lead into or away from any given Bad Place. . . [Olivia’s] internal journey moves the novel away from a mere thrill-ride—though even the toughest connoisseur of rollercoasters will not be disappointed by the scary bits.

A compelling near-future thriller of hard choices and unintended consequences. This is science fiction that feels all too real. Highly recommended.

The Chaos Function just flat-out knocked me back in my chair.  The very best kind of action-thriller meets hard sci-fi.  A mind-bending jolt of high concept ideas injected straight to your frontal cortex. One of the best books I’ve ever read.

Relentless, terrifying, and affecting, this book left me feeling like I’d been strapped to the front of the car like Mad Max in Fury Road—not realizing that it was taking me to an emotional ending that would leave me gutted. I’ve been a huge fan of Skillingstead’s work for years, but in The Chaos Function he’s outdone himself!

Deftly marrying genres, Jack Skillingstead has given us a science fiction thriller for the ages. Journalist Olivia Nikitas discovers an centuries-old conspiracy with the means to alter the very fabric of time. Dodging from war-ravaged Syria across a suddenly-apocalyptic United States, she must fight to survive in a changeable world where she alone knows what’s real. With a plot as mind-bending as pharmaceutical-quality Phillip K. Dick, The Chaos Function is an astonishment from page one to its explosive climax.