As many of you reading this already know, I recently proposed to my girlfriend, Christie Yant, who I have been seeing for about a year now. Because several of you were asking for details, here’s how the proposal happened.

The ring had belonged to my grandmother, who I took care of and lived with for several years (and who helped raise me as a kid). My grandmother and grandfather were married for 60+ years, so the ring seemed to have a lot in its favor. Getting the ring sized was a bit of a challenge; I didn’t know Christie’s ring size, so I had to do some detective work. There weren’t a whole lot of rings laying around for me to borrow and take down to the jeweler’s, so at some point I was kind of despairing. I didn’t want to ask her daughter Danni, or any of her friends, lest I tip my hand too early. Thankfully, eventually I saw her wearing one of her rings, then later saw that same ring in the bathroom. But I didn’t want to take that one since she’d just been wearing it, in case she went back looking for it to put it on again. So I dug around and found another ring and compared the two to make sure they were the same size.

Ring in hand, my next challenge was to find a way to get down to the jeweler in secret. One of the nice things about both of us working from home is that we can basically spend all day with each other. But that can make things a bit difficult when you want to plan a surprise. We also only have one car that we share between us, and we usually go to the gym together, so I don’t really have any good excuses generally to go out by myself. Fortunately, after I found the ring for size-reference, one day Christie didn’t feel like going to the gym, so I was able to stop by the jeweler on the way and drop it off. I also had my grandparents’ wedding bands, so I got those rings resized too.

Nearby where we live in Lompoc is La Purisma Mission, one of the Spanish missions in California, a series of religious and military outposts established by Spanish Catholics of the Franciscan Order between 1769 and 1823 to spread the Christian faith among the local Native Americans. The Purisma mission is now a California state park, and is nearly fully preserved: the old buildings are still there and restored, so it’s kind of a combination of museum and park. Christie took me down there on my first trip out to visit her here in Lompoc, as it’s one of her favorite places, and we go down there for walks fairly regularly.

[Christie’s note: We intend to rebuild civilization there after the Apocalypse.]

The day I proposed (March 17) is our dating anniversary. I suggested we go down to the mission for a picnic, so we packed up a lunch and headed down there around noon…or rather we tried to, but the car wouldn’t start. That’s a recurring problem of ours–the battery doesn’t hold a charge very well–so we have a battery charger, and we just had to delay heading down there for an hour while the battery charged. We also narrowly averted disaster when we left the keys in the car and very well could have locked them in there; luckily the passenger side door was unlocked!

[Christie’s note: John never used the M Word in conversation, but very recently he had started telling me about all of these different writers who had met their wives at conventions. (We met at WFC.) [John’s note: I recently sent Robert Silverberg a royalty check and he noticed I had moved to Lompoc, and so I explained that I had moved in with my girlfriend, who I had met at WFC; he said that he too met a woman at a convention…and that he’s still married to her after all these years. And then S. M. Stirling sent me his bio for an upcoming anthology, and in his bio he describes meeting and then marrying his wife at a convention.] It was kind of a dramatic shift from what had seemed almost like avoiding the topic to directly comparing us to long-married couples. Then when he first suggested the Mission he had this LOOK on his face, like he had something up his sleeve. Our boy does not do guile very well. (One of the things I love about him.) Based on that, I suspected it *might* be happening that day. I went so far as to just double-check with my teenaged daughter and make sure there were no objections JUST IN CASE. So I went in kind of prepared, as you’ll see.]

After the battery charged, we headed over to the mission. Once on the grounds, we had some debate as to where to have the picnic; Christie had attempted picnics there before and seemed to be wary of yellow jackets descending upon us. I had suggested we go over by the Spring House, which seemed to be Christie’s favorite spot at the mission, based on what she had said during previous visits. She was a bit concerned about the potential yellow jacket problem over there, and we considered doing the picnic over by the main building, which has a church and historical housing and offices and stuff (for display, not in use by anyone). In the end, we decided to chance the Spring House. (And it was all fine! No bugs!)

So we laid down our blanket and set up camp on the shady side of the Spring House. No one was around; it was just us and the ground squirrels, which we could see out on the field in front of us. We ate our lunch. There MAY have been some hugging and kissing and whispers of “happy anniversary” and discussion of that an awesome year it had been.

When we finished up, Christie asked if we should walk around for a bit before heading back, and I said sure. So we stood up and gathered our things and ended up in a hug. When we broke the hug, I pulled a matchbox out of my pocket.

The Proposal, And More Background (In Which Christie is Totally Not a Crazy Person at All)

Christie has been known to make these little boxes that she calls “wish boxes” in which, as the name implies, she inserts a wish. [Christie’s disclaimer: I SWEAR THIS DOES NOT MAKE ME A CRAZY PERSON. Also this was a SECRET. Nobody knows about those but you. Until now. It’s okay though, it’s needed context.] The wish boxes are made out of matchboxes, which she paints with acrylics and to which she sometimes adds other accouterments. When she started falling for me, she made up a wish box and wrote “John Joseph Adams <3” on a slip of paper that she placed inside (the wish). After we started dating, she gave me the wish box, and I’ve had it on my desk ever since. (You should have seen the amount of bubble wrap I wrapped it with when I moved to ensure that it didn’t get crushed.)

The matchbox I took out of my pocket was a wish box of my own. Luckily, in the weeks prior to the proposal, I had a D&D miniature I needed to paint, so I had a handy excuse to take her paints out into the garage so I could work on the wish box in secret. (Also luckily, she tends to sleep in on the weekend, whereas I can’t help but get up at like 7 every day.)

So I handed her the wish box and let her open it. On the slip of paper inside, I had written: “CY <3 JJA ∞”. As she was reading it, I slipped the ring out of my pocket.

So when she was done reading the wish, I dropped to one knee and asked “Will you marry me?” to which she said “Oh hell yes!”

[Christie’s note: I think it went, “Oh hell yes! Yes. YES. Yes.” Eloquent to the end, that’s me. This was followed by hugging and getting him to stand up–because even in the midst of all of this I was gravely concerned about his knee being on the hard ground; funny the things one thinks of during LIFE-CHANGING MOMENTS OF GREAT IMPORTANCE–before we fumbled with shaky hands to get the ring on. [John’s note: I tried to put the ring on the wrong finger at first. My bad.] First thought: He had it sized right! How did he do that? Second thought: MY GOD IT’S BEAUTIFUL! He must have been going through my bookmarks. Well done. I was surprised to learn that it was his grandmother’s because it suited my tastes so perfectly. That it had that extra layer of meaning made it even more wonderful.]

(When she saw the ring, Christie couldn’t stop looking at it, both because of what it means and because of the beauty of the object itself; unbeknownst to me, my grandmother’s engagement ring was very much like a ring Christie had been coveting online, discovered during her periodic “sparkle therapy” sessions (i.e., browsing the internets for pretty things to make you feel better).

We hugged and kissed, and she said “Oh!” and handed me a wish box of her own: 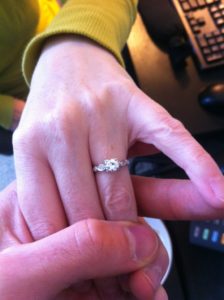