As real robots creep into our lives, so does a sense of fear—we have all wondered what horrifying scenarios might unfold if our technology were to go awry. The idea of a robot uprising is fascinating precisely because it is possible. This anthology will bring to life the answers to our half-formed questions by providing a collection of meticulously precise, exhilarating trips into a future in which humans survive only by being more clever and tenacious than the machines they have created.

At the helm of this project are Dr. Daniel H. Wilson—bestselling novelist and expert in robotics—and John Joseph Adams—bestselling editor of more than a dozen science fiction/fantasy anthologies. Together, they have drawn on their wide-ranging contacts to assemble a talented group of authors eager to attack the topic of robot uprisings from startling and fascinating angles.

Under the direction of a robotics specialist and a veteran editor, ROBOT UPRISINGS will expose readers to a strategically chosen mix of stories that explore novel scenarios of robotic malfunction, misuse, and outright rebellion. Each of our authors is an accomplished specialist in areas such as horror, science fiction, techno-thrillers, military SF, steampunk and apocalyptic fiction.

Combining unique viewpoints and exacting realism, ROBOT UPRISINGS promises to thrill generations of readers who used to trust their technology. 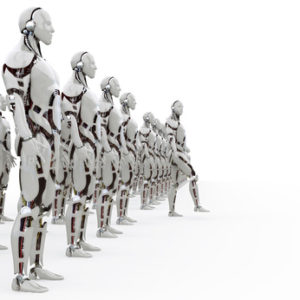