I was tagged by Charles Tan to take part in The Next Big Thing meme, which basically asks writers (and editors) to answer the same set of questions and hops from blog to blog.

What is the title of your next book?

That depends on what is meant by “next.” The next book I have that’s coming out is The Mad Scientist’s Guide to World Domination (Feb. 19, 2013). That’ll be followed shortly thereafter by Oz Reimagined: New Tales from the Emerald City and Beyond (Feb. 26, 2013), which I co-edited with Douglas Cohen. And just recently released were Epic: Legends of Fantasy (Nov. 6, 2012) and the revised and expanded second edition of my anthology Brave New Worlds: Dystopian Stories (Dec. 4, 2012). If “next” means the next book that I’m working on now, then that’s Wastelands, Vol. II: More Stories of the Apocalypse (Summer 2013).

For purposes of the meme here, since I have to pick one, I’ll go with the mad scientist anthology.

Where did the idea come from for the book?

What genre does your book fall under?

It’s an anthology of stories about mad scientists and evil geniuses, so it’s mostly science fiction, with some fantasy and a liberal dose of humor in many cases.

What actors would you choose to play the part of your characters in a movie rendition?

I don’t care but I would like—nay, DEMAND—it be directed by Christopher Nolan. Or, given the humorous slant of most of the book, maybe Edgar Wright.

What is the one sentence synopsis of your book?

Evil geniuses are always so keen on telling captured heroes all their fiendish plans; isn’t it about time someone gave them a platform such as this one to reach the masses with their messages of hope death and prosperity destruction?

Will your book be self-published or represented by an agency?

It will be published by Tor Books (Feb. 19, 2013). I’m represented by Joe Monti of Barry Goldblatt Literary.

How long did it take you to write the first draft of the manuscript?

It took about six or nine months or so to assemble the anthology, I guess, if you count all the time I gave the authors to write their stories.

What other books would you compare this story to within your genre?

It is beyond compare. If any dare to even stand in its shadow, they will be utterly and mercilessly destroyed.

Who or what inspired you to write this book?

World domination. Editing the anthology was actually an integral part of my own evil plan for taking over the world. See, I just got some of the greatest creative minds of our time to dream up various world domination scenarios under the guise of fiction, which I will of course exploit myself.

First order of business: owning and reading The Mad Scientist’s Guide to World Domination will be mandatory!

What else about your book might pique the reader’s interest?

As research for the anthology, I had to do a lot of scouting to find the right Pacific island to build my evil lair. An evil lair has to be on an island, of course, and it requires a certain level of shark-infestation in the waters, so it can be difficult to find just the right spot, especially with all the mad scientist competition for lair real estate. (Plus, you can’t use any of the ones the government tested nukes on…well, actually, I can see that being of use to SOME people, but it’s not my thing.)

I’m told tradition dictates, I’m to tag five people, and thus urge them to participate. They will or they won’t! (I am a benevolent dictator!) Hope you check out their blogs next week: 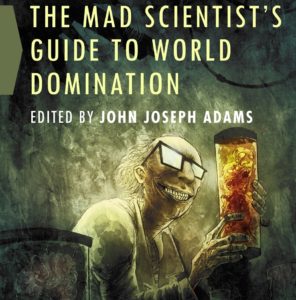