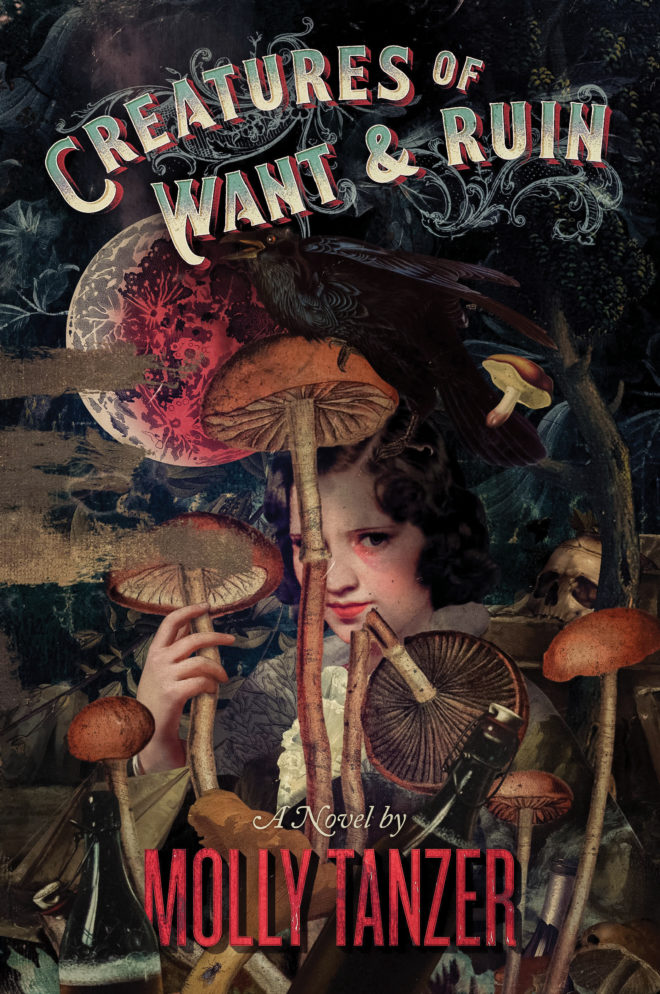 Creatures of Want and Ruin

Amityville baywoman Ellie West fishes by day and bootlegs moonshine by night. It’s dangerous work under Prohibition—independent operators like her are despised by federal agents and mobsters alike—but Ellie’s brother was accepted to college and Ellie’s desperate to see him go. So desperate that when wealthy strangers ask her to procure libations for an extravagant party Ellie sells them everything she has, including some booze she acquired under unusual circumstances.

What Ellie doesn’t know is that this booze is special. Distilled from foul mushrooms by a cult of diabolists, those who drink it see terrible things—like the destruction of Long Island in fire and flood. The cult is masquerading as a church promising salvation through temperance and a return to “the good old days,” so it’s hard for Ellie to take a stand against them, especially when her father joins, but Ellie loves Long Island, and she loves her family, and she’ll do whatever it takes to ensure neither is torn apart.

Molly Tanzer is the British Fantasy and Wonderland Book Award-nominated author of Creatures of Will and Temper, Vermilion and The Pleasure Merchant. She is also the co-editor of Mixed Up: Cocktail Recipes (and Flash Fiction) for the Discerning Drinker (and Reader). For more information about her critically-acclaimed novels and short fiction, visit her website, mollytanzer.com, or follow her @molly_the_tanz on Twitter or @molly_tanzer on Instagram.

Praise for Creatures of Want and Ruin

Tanzer’s charming, confident follow-up to Creatures of Will and Temper continues the conceit of drawing on famous literary source texts for character and plot material; here, The Great Gatsby crashes into the works of H.P. Lovecraft, with, of course, chaotic results. […] Fin and Ellie make an appealing team as they work to figure out what’s wrong and stop it, and the depiction of Long Island is a fine example of nuanced, lovely landscape writing. The portrayal of groups of normal people falling into mob violence and hatred of the other groups is genuinely unnerving, and Tanzer resists simplistic moral takes.

[A] compelling historical-fantasy world where demons live among us. […] Tanzer expertly weaves an authentic historical setting into a tense, engrossing supernatural frame with lush descriptions and a steadily building pace. The alternating points of view of the two female protagonists, unwilling to live within society’s confines, really stand out. Despite the supernatural, historical setting, readers will see themes and issues that reverberate eerily with our present.

[Tanzer has] proven to be one of the most distinct voices in contemporary SFF. Her followup to last year’s Creatures of Will and Temper mixes a dash of F. Scott Fitzgerald and a shake of H.P. Lovecraft into something wholly original. […] Tanzer balances wink-wink references to contemporary politics with pulpy tropes and solid storytelling.

This is a measured, atmospheric novel, with compelling characters and a deeply disturbing undercurrent of horror. The real horror here, though, is less the demonic influence—the demons, after all, can only act on humans through their initial invitation and consent—than it is the sudden discovery of deep veins of racism and misogyny underpinning the quiet community where Ellie’s spent her entire life, and in the ways in which Fin has been made to feel invisible and unvalued by the people in her life. It’s a fascinating novel, and an accomplished one.

Tanzer has a deft hand with characterization [and] every page is compelling. This is quiet horror, filled with emotional realism: a growing sense of unease suffuses every encounter with the demonic, until the true horror is revealed—and that horror is about equally divided demonic and human. […] I enjoyed [the book] greatly and hope to see many more novels from Molly Tanzer in the years to come.

Profound and enthralling. This book is a delicate dream, mixing its own internal mythology with a brutal tale of prejudice and human frailty. I can’t recommend it enough. Tanzer is absolutely one to watch.

—Seanan McGuire, bestselling, award-winning author of In an Absent Dream

Once again Molly Tanzer demonstrates a bootlegger’s knack for transforming glorious pulpy material into human spirit. Creatures of Want and Ruin is a riveting two-fisted weird pulp adventure with demons, smuggling, sex, archery, cults, and crime that doesn’t shrink from carving its predecessors open to poke around in their guts. Great fun!

The writing in Molly Tanzer’s Creatures of Want and Ruin is so smooth you don’t notice it past the first word. The story telling takes over and you just want more of Ellie West and the denizens of her world, the dead-on 1920s Long Island historical setting, the Great South Bay, the apocalyptic religious cult, the strangeness, until the end and there’s no more story to go. A wonderfully engaging read!

—Jeffrey Ford, award-winning author of A Natural History of Hell and Ahab's Return

Molly Tanzer writes human darkness, intimacy, and joy with equal skill and fervor. Her characters blaze with life, straining against the bonds of society. Creatures of Want and Ruin is horrific fantasy that races along at a breathless clip, with family drama as the revving engine. If you haven’t read Molly Tanzer yet, this is the perfect time to start!

Creatures of Will and Temper was my favorite fantasy of 2017, and sequel Creatures of Want and Ruin is even better—a perfect Prohibition-Era cocktail of bootleggers, demons, and high society that will leave you shaken and stirred.

—Tim Pratt, award-winning author of The Wrong Stars and Heirs of Grace

Molly Tanzer’s Creatures of Want and Ruin is a novel brimming with desire. Desires of the flesh. Desires of the soul. Desire for destruction. Though the demons threatening Prohibition-era Long Island are alien and capricious, the more horrifying evils here are the perils of xenophobia and bigotry. Timely, riveting, and weird in all the right ways, this book is full on diabolical!

—Bryan Camp, author of The City of Lost Fortunes

With Creatures of Want and Ruin, Molly Tanzer has created a deliciously dark and satisfying follow-up to Creatures of Will and Temper. This Prohibition-era romp is rich with archery and moonshine; the bonds between siblings; the love between female friends; and the stark, chilly beauty of Long Island’s loneliest places. Oh—and a demon who is hell-bent on wreaking havoc. Creatures of Want and Ruin is a fun read and an easy page-turner, but it also grapples with hard and heavy stuff: the heartbreak of growing apart from people you once loved, and finding them strangers; the destructive forces unleashed by bigotry and hate; and the sacrifices we might be called upon to make in order to save our world. For a novel about demonic moonshine and nefarious fungus, Creatures of Want and Ruin is nevertheless grippingly timely.