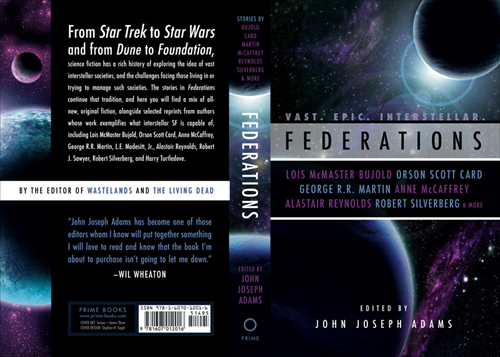 Also, a reminder that Federations is now available for pre-order. Note that if you pre-ordered it earlier, you may need to reorder, as the ISBN changed, so stores like Amazon will have cancelled those orders, because when the ISBN changed, a whole new entry for the book was created in their system. 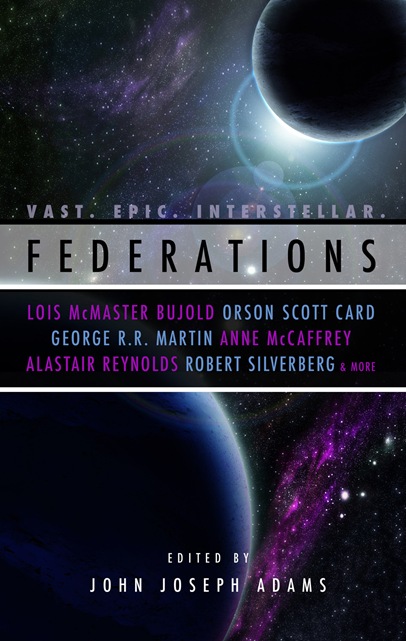 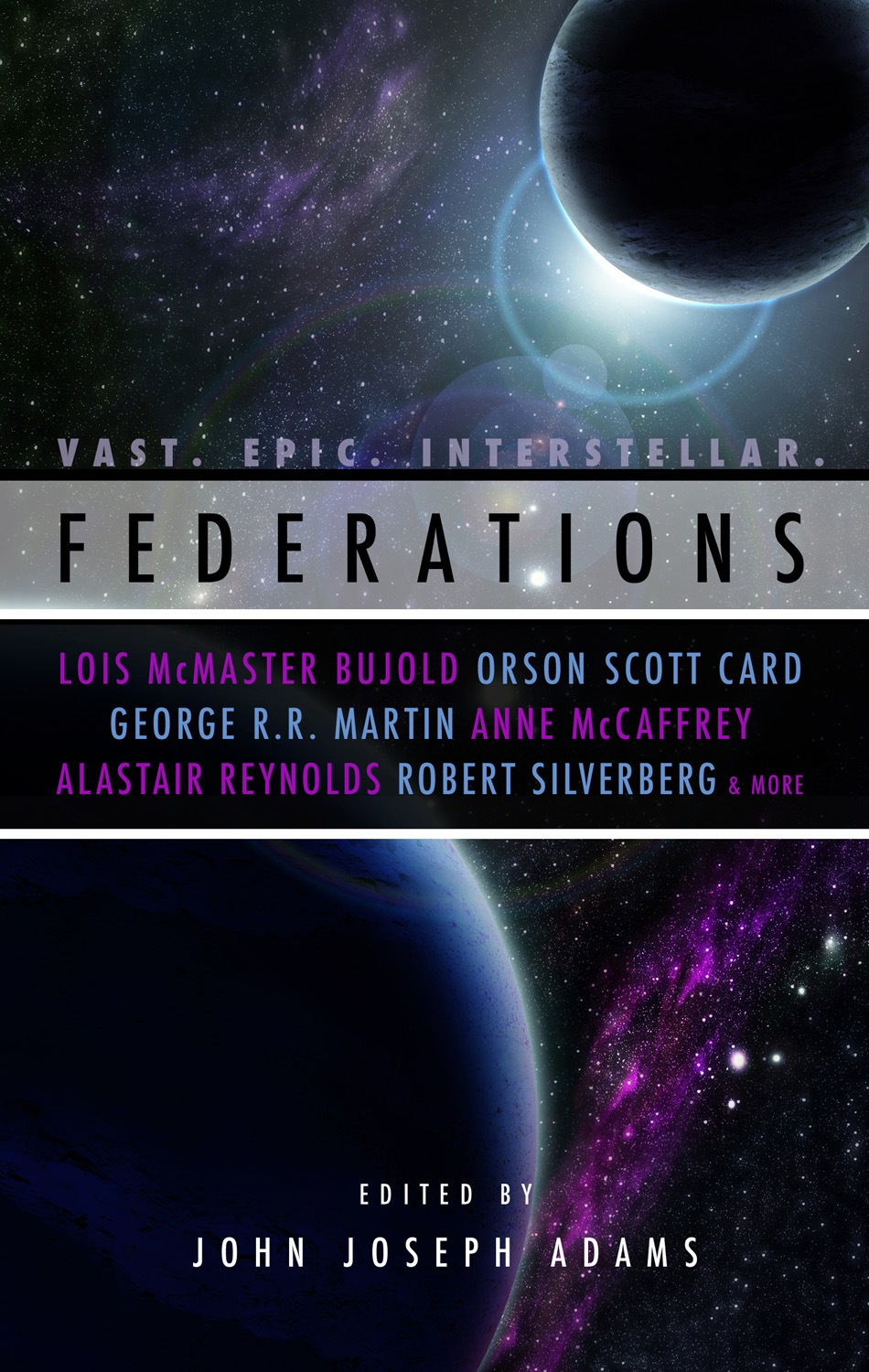 I came home from Worldcon to discover that Amazon.com and Barnes & Noble.com, both have stock of my new anthology Seeds of Change, so I’ve now launched the website www.seedsanthology.com for it. The stories aim to confront some of the pivotal issues facing our society today, such as racism, global warming, peak oil, technological advancement, and political revolution. It features original fiction from Tobias S. Buckell, Ken MacLeod, and Jay Lake, among others.

You can read the complete text of three of the anthology’s nine stories on the website, in HTML, PDF, or Mobipocket format. There are excerpts available of the remaining six stories.

Other bonus features include interviews with the authors and further reading lists for people who’d like to learn more about the issues discussed in the stories. And finally, the site also features a book trailer which features a short dramatized excerpt of each story, along with original musical score (which you can also download as an instrumental MP3 track).

It’s available in the usual online bookstores as well as in ebook format for Kindle, Sony Reader, and Mobipocket Reader, and are available in additional formats via ebook retailer Fictionwise. Also, through August 18th, you can download for your Sony Reader a free sampler featuring three stories from Seeds of Change.

From Star Trek to Star Wars, from Dune to Foundation, science fiction has a rich history of exploring the idea of vast intergalactic societies, and the challenges facing those living in or trying to manage such societies. The stories in Federations will continue that tradition.

What are the social, religious, environmental, or technological implications of living in such a vast society? What happens when expansionist tendencies on a galactic scale come into conflict with the indigenous peoples of other planets, of other races? And what of the issue of communicating across such distances, or the problems caused by relativistic travel? These are just some of the questions and issues that the stories in Federations will take on.

Genres: Science Fiction only. Original fiction only, no reprints.

Payment: 5 cents per word ($250 max), plus a pro-rata share of the anthology’s earnings and 1 contributor copy.

Response Time: Most rejections will be sent out quickly, but stories that I like may be held until January 31 before a final decision is made.

Submission Instructions: Email your story in .doc Microsoft Word format (preferred) or .rtf rich-text format to John Joseph Adams at [anthology now closed]. Include the title of the story and your byline in the subject line of the email.

John Joseph Adams is the editor of the anthologies Wastelands: Stories of the Apocalypse, Seeds of Change, and The Living Dead. He is also the assistant editor at The Magazine of Fantasy & Science Fiction, and is the print news correspondent for SCI FI Wire (the news service of the SCI FI Channel). For more information, visit his website at www.johnjosephadams.com.

Hot on the heels of my announcement that I’ll be editing a reprint anthology of dystopian fiction for Night Shade Books, I’m happy to announce that I’ll also be editing a reprint anthology of vampire fiction for them. It’s tentatively scheduled for publication in late 2009, so my deadline for recommendations would be around September 1, 2008, though the sooner the better. As with my previous reprint anthology projects, to assist me in assembling this volume, I’ve setup a database to solicit recommendations from readers and writers of vampire fiction.

BTW, it doesn’t have a title or even a tentative title yet, so if you want to suggest one of those too, feel free!

Now’s as good a time as any to announce that my next project for Night Shade Books will be a dystopian fiction reprint anthology called Brave New Worlds. Release date is currently unknown, but it will probably come out sometime in late 2010. Though that’s a long way away, I’m already working on putting it together, and I need your help. As I did with the Zombie Fiction Database, I’m soliciting recommendations of dystopian fiction for this new project. So if you have any recommendations, please visit my Dystopian Fiction Database and enter some of your favorite works that fit into that sub-genre. If you’d like to browse though the works that have already been entered into the database, you can do that here.

Any questions, let me know!

Who do you think would be the best people to approach for blurbs for my anthology The Living Dead? Let’s assume George Romero’s on the top of the list and proceed from there. 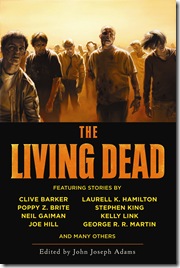 At last, I’m done assembling my zombie anthology, The Living Dead. It’s scheduled for publication in September 2008, and is available for pre-order from Night Shade Books and Amazon.com. Read on for the preliminary cover copy and the complete table of contents. (For those of you counting, that’s 34 stories, and more than 230,000 words.)

From White Zombie to Dawn of the Dead; from Resident Evil to World War Z, zombies have invaded popular culture, becoming the monsters that best express the fears and anxieties of the modern west. The ultimate consumers, zombies rise from the dead and feed upon the living, their teeming masses ever hungry, ever seeking to devour or convert, like mindless, faceless eating machines. Zombies have been depicted as mind-controlled minions, the shambling infected, the disintegrating dead, the ultimate lumpenproletariat, but in all cases, they reflect us, mere mortals afraid of death in a society on the verge of collapse.

This Year’s Class Picture by Dan Simmons, from Still Dead (1992)

Some Zombie Contingency Plans by Kelly Link, from Magic For Beginners (2005)

The Third Dead Body by Nina Kiriki Hoffman, from The Ultimate Zombie (1993)

The Dead Kid by Darrell Schweitzer, from The Book of More Flesh (2002)

Bobby Conroy Comes Back From The Dead by Joe Hill, from Postscripts (2005)

Those Who Seek Forgiveness by Laurell K. Hamilton, from Strange Candy (2006)

In Beauty, Like the Night by Norman Partridge, from Mr. Fox and Other Feral Tales (1992)

Prairie by Brian Evenson, from The Silver Web (1997)

Everything is Better with Zombies by Hannah Wolf Bowen, from Phantom (2006)

Home Delivery by Stephen King, from Book of the Dead (1989)

Less than Zombie by Douglas E. Winter, from Book of the Dead (1989)

The Skull-Faced Boy by David Barr Kirtley, from Gothic.net (2002)

The Age of Sorrow by Nancy Kilpatrick, from Postscripts (2007)

She’s Taking Her Tits to the Grave by Catherine Cheek, from Ideomancer (2008)

Dead Like Me by Adam-Troy Castro, from A Desperate, Decaying Darkness (2000)

Zora and the Zombie by Andy Duncan, from SCI FICTION (2004)

Followed by Will McIntosh, from Lady Churchill’s Rosebud Wristlet (2006)

The Song the Zombie Sang by Harlan Ellison® & Robert Silverberg, from Cosmopolitan (1970)

How the Day Runs Down by John Langan, original to this volume (2008)